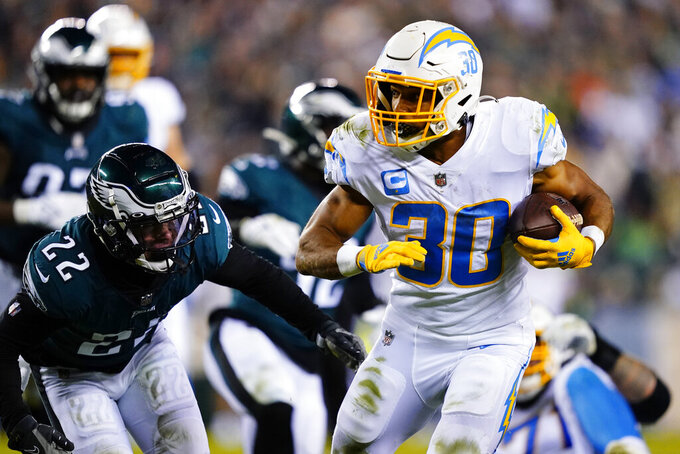 BETTING LINE: Chargers by 2 1/2, according to FanDuel SportsBook.

TURNOVER DIFFERENTIAL: Vikings plus-6; Chargers plus-2.

VIKINGS PLAYER TO WATCH: DE Everson Griffen. The USC product is still chugging along in his 12th year as a professional, with five sacks and four tackles for loss in his return to Minnesota. Griffen had three tackles and one quarterback hit against Baltimore in the Vikings’ first game since Danielle Hunter sustained a season-ending pectoral injury. He will have to be at his best as a pass rusher to slow down Chargers star Justin Herbert.

CHARGERS PLAYER TO WATCH: OLB Joey Bosa. He’s been solid with 4 1/2 sacks and two forced fumbles this season, but Bosa hasn’t taken over a game like he’s capable of doing. The most alarming sign is Bosa having just three tackles for loss after making 68 negative stops in his first 63 games, and that lack of push off the edge is one of the reasons Los Angeles has the worst run defense in football.

KEY MATCHUP: Vikings LB Eric Kendricks vs. Chargers OLs Corey Linsley and Matt Feiler. This is shaping up to be Kendricks’ most productive season in the NFL, having at least 10 tackles in five games, including a career-high 17 versus the Ravens. He’ll be tested in a variety of ways by the Chargers, whether in the running game with Austin Ekeler or covering crossing routes by WR Keenan Allen and their TEs. On the instances when Kendricks is called on to blitz — he has two sacks in the past three games — the interior of Los Angeles’ line must be stout, especially after Minnesota showed it could generate inside pressure from DTs Sheldon Richardson and Armon Watts against Baltimore.

KEY INJURIES: Vikings S Harrison Smith will miss a second straight game on the COVID-19 reserve list, and CB Patrick Peterson (hamstring) is out for the third straight game. DT Michael Pierce (elbow) has missed four straight games and did not practice Wednesday. Hunter is out for the season. C Garrett Bradbury also missed the last game for COVID-19. His status is uncertain. ... Los Angeles is optimistic CB Asante Samuel Jr. (concussion) will play after sitting out against Philadelphia, but CB Michael Davis (hamstring) is expected to miss another game. The Chargers desperately need to get healthy on the back end, with reserve CB Ryan Smith out for the season (torn ACL sustained when he was put into the starting lineup against the Eagles).

SERIES NOTES: The Vikings have won the past two games in the series. It is the first time in the series, which dates back to 1971, either team has won consecutive meetings. … Minnesota’s 29-point victory in 2019 was its largest in the series, tying the Chargers’ 42-13 win in 1984 for biggest margin. … The Vikings and Chargers have split the eight games (4-4) decided by at least 13 points. … Los Angeles is 3-2 against the Vikings at home, with its most recent win coming in 2011 (24-17 in San Diego).

STATS AND STUFF: Minnesota has scored on its opening drive in seven straight games. It has five touchdowns and two field goals in that span. … Vikings S Camryn Bynum became just the second DB since 2000 to get at least 12 tackles and an interception in his first career start, with the rookie from Cal’s performance against Baltimore joining S Marques Anderson for Green Bay in 2002. … QB Kirk Cousins has been sacked a league-low 10 times this season, with seven of those coming in three games against Cincinnati, Cleveland and Detroit. … Minnesota has converted more than 40% of its third-down attempts in a game just once this season. The Vikings were 50% (7 of 14) against Dallas in Week 8. … The Chargers lead the NFL in fourth-down conversions (11) and attempts (17). They were 2 for 4 versus Philadelphia. … Herbert needs one touchdown pass to become the fourth player with 50 scoring throws through his first 24 starts. Patrick Mahomes reached 50 in 17 games, while Kurt Warner did it in 21 and Dan Marino in 22. … Allen needs 3 yards receiving to become the fourth Chargers with 8,000 career yards (Antonio Gates, Lance Alworth, Charlie Joiner). … Los Angeles has been outscored 69-23 in the third quarter.

FANTASY TIP: Timing is everything, and Vikings WR Justin Jefferson should be able to feast on what is suddenly a depleted Chargers secondary. Philadelphia’s DeVonta Smith became the first WR to get 100 yards receiving against Los Angeles last week, and the success he had downfield will be a blueprint Jefferson can copy, especially if Samuel remains out.