Vikings lose Cousins to COVID list before game vs. Packers 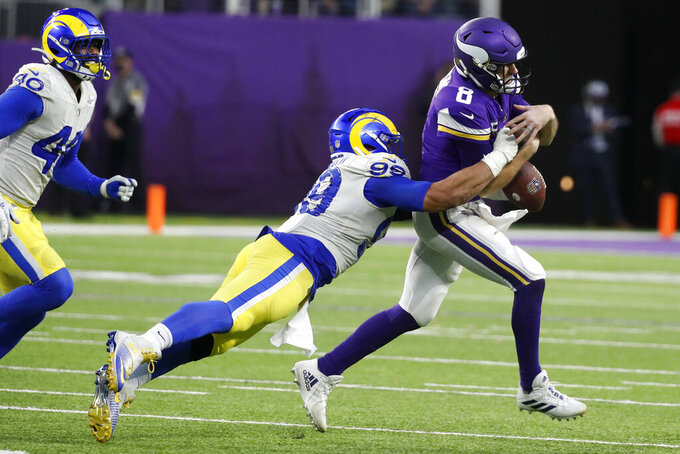 Minnesota Vikings quarterback Kirk Cousins (8) fumbles the ball as he is tackled by Los Angeles Rams defensive end Aaron Donald (99) during the second half of an NFL football game, Sunday, Dec. 26, 2021, in Minneapolis. The Rams won 30-23. (AP Photo/Bruce Kluckhohn)

Kirk Cousins has never missed a game in the NFL to injury.

His first unplanned absence, due to COVID-19, could not have come at a worse time for the Minnesota Vikings.

The Vikings placed their starting quarterback on the COVID-19 reserve list Friday, two days before their most important game of the season at Green Bay.

Cousins, who is unvaccinated, couldn't be cleared in time to play even if he were feeling fine. The NFL recently reduced the required quarantine period to five days for asymptomatic players.

The Vikings (7-8) are one game out of the last wild-card spot in the NFC with two weeks to go. The Packers (12-3) are in control of the top seed and a first-round bye.

The Vikings activated backup quarterback Sean Mannion from the COVID-19 reserve list, putting the seventh-year veteran in line to start at frigid Lambeau Field on Sunday night. Rookie Kellen Mond, who was drafted in the third round, has not developed quickly enough this season to be considered.

“Sean is extremely bright. He studies like crazy. He’s a great competitor. He’s put in his time. He’s earned this opportunity, and I think he’ll be ready,” coach Mike Zimmer said after practice on Friday.

“He’s got a big-time arm. He is going to do exactly what the coaches tell him. He is so reliable in that regard. I’ve got a lot of respect for him not only as a person but as a player,” said Packers coach Matt LaFleur, who was Mannion's offensive coordinator with the Rams in 2017. “They’ve still got multiple playmakers on that offense, whether they do it through the air or on the ground.”

After Minnesota's last game, a 30-23 loss to the Rams, Cousins acknowledged the predicament of the case numbers climbing within the team like all across the league.

Cousins has 30 touchdown passes and seven interceptions this season and is fourth in the NFL in passer rating (101.3). He is 29 yards passing short of hitting the 4,000 mark for a sixth time in seven years as a starter. Cousins is in his fourth season with the Vikings, who have him signed for 2022 with a $45 million salary-cap charge.

Mond and recent addition Kyle Sloter are the other quarterbacks on Minnesota's roster. When Mond tested positive in training camp, Cousins had to sit out five days as an unvaccinated close contact.

Zimmer didn't hide his frustration in August with the players who remained unvaccinated, expressing resignation that they would miss games at some point during the year. Plenty of vaccinated players have tested positive and had to sit out, of course, but the rate of infection by the virus among unvaccinated people is much higher.

Unvaccinated players must continue to test daily. Any player, regardless of vaccination status, must test while they have symptoms. Zimmer said he was not sure about symptoms for Cousins.

“We hate to see that happen to Kirk, but he’s done a lot of great things for us,” Zimmer said. “You’re always hopeful that none of your players get it.”

In Denver, the Broncos scrubbed their regular practice for the second straight day and instead held an indoor walkthrough on Friday after five more players were added to the COVID-19 list, including wide receiver Jerry Jeudy, outside linebacker Bradley Chubb and inside linebacker Baron Browning. That brings the number of Broncos on the list to 15.

Coach Vic Fangio said he wasn’t sure he’d be able to dress the usual 45 players on Sunday when the Broncos (7-8) play the Chargers (8-7), who are dealing with a COVID-19 outbreak of their own.

The Broncos will be without two starting wide receivers (Jeudy and Tim Patrick), three of their top four edge rushers (Chubb, Jonathon Cooper and Stephen Weatherly), their top slot cornerback (Bryce Callahan), their dime back (Caden Sterns), their starting right tackle (Bobby Massie) and their top swing tackle (Calvin Anderson) and a starting inside linebacker (Browning).

Also out because of COVID-19 is defensive line coach Bill Kollar.

Fangio acknowledged the outbreak forced him to change his game plans.

“Yeah, obviously it does, but it’s not like we’re recreating the wheel here,” Fangio said. “We’ve just got to adjust some of the plays offensively to fit our personnel, both from a talent standpoint and a knowledge standpoint. And the same thing will happen defensively.”

The Cincinnati Bengals placed cornerback Trae Waynes on COVID-19 reserve, ahead of their much-anticipated game against the AFC-leading Kansas City Chiefs.

Around the league, teams were experiencing more gains than losses as players in the pre-Christmas surge of positive tests have begun to trickle back to action.

The Jacksonville Jaguars activated seven players from their COVID-19 reserve list, including defensive starters Josh Allen, Myles Jack and Damien Wilson. Allen, Jack and Wilson cleared protocols and will fly with the team to New England.

The Jaguars (2-13) later added cornerback Shaquill Griffin to the list, bringing their total to 21 players. They also could be without defensive line coach Tosh Lupoi. Interim coach Darrell Bevell said Friday he hopes center Brandon Linder and guard Andrew Norwell will be cleared in time to play the Patriots. Jacksonville has a second plane lined up to take players who could still clear protocols as late as Sunday morning.

—Safety Jahleel Addae and running back Marlon Mack to the Indianapolis Colts.

—Cornerback Kevin King to the Packers.