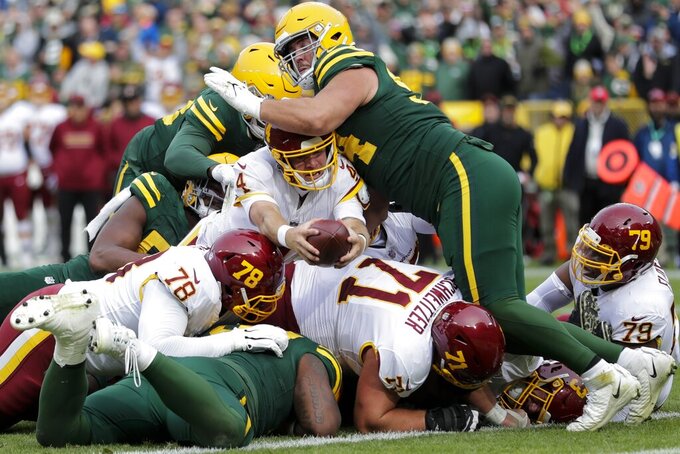 Washington Football Team's Taylor Heinicke is stopped at the goal line on fourth down during the second half of an NFL football game against the Green Bay Packers Sunday, Oct. 24, 2021, in Green Bay, Wis. (AP Photo/Aaron Gash)

That paradox of a statistic reveals just how much Washington struggled whenever it got into scoring position in its 24-10 loss to the Green Bay Packers on Sunday.

On five separate possessions, Washington drove inside Green Bay’s 30-yard line and came up empty. That included two consecutive scoreless drives that ended inside the 5.

“We need to find ways to finish drives as an offense,” center Chase Roullier said. “We’re leaving a lot of points out there on the field. It’s something that we’re all frustrated with and we all want to change and we need to figure it out.”

Washington (2-5) reached the end zone on its opening possession as Taylor Heinicke threw a 40-yard touchdown pass to Terry McLaurin. But its next points wouldn’t come until Chris Blewitt kicked a 45-yard field goal with 2:25 left in the game.

Moving the ball against the Packers (6-1) wasn’t an issue. Washington outgained Green Bay 430-304. The problems came whenever Washington got into field-goal range.

And the Packers’ defense hadn’t exactly been the Steel Curtain in these types of situations up until now. Before Sunday, Packers opponents had scored touchdowns every time they reached the red zone.

“It was disappointing,” Washington coach Ron Rivera said. “We had opportunities and we just didn’t convert when we had a chance.”

Blewitt, who was making his NFL debut Sunday following the release of veteran kicker Dustin Hopkins, had a 42-yard field-goal attempt blocked by T.J. Slaton early in the second quarter. That prevented Washington from taking a 10-7 lead.

But the biggest frustrations came in the second half as Heinicke tried to rally Washington from a 21-7 deficit.

Heinicke grew up rooting for Brett Favre and talked in the days leading up to the game how he savored the opportunity to play at Lambeau Field. When he ran into the end zone on third-and-goal from the 3, Heinicke found a fan in a Washington jersey and did a Lambeau Leap in his area.

There was just one problem – the touchdown was overturned after a replay review determined Heinicke’s knee hit the ground just before his arm crossed the goal line on his dive into the end zone.

Washington appeared to cut that margin in half when Heinicke ran into the end zone on third-and-goal from the 3.

On a fourth-and-goal sneak attempt from half a yard away, Heinicke fumbled and it was determined that he didn’t cross the goal line after he regained possession.

Washington got into the red zone on its next two possessions as well.

One series ended when Heinicke couldn’t connect with Ricky Seals-Jones on fourth-and-2 from the 3. The next one concluded with Chandon Sullivan making an end-zone interception on third-and-8 from the 12.

Heinicke put up good numbers, going 25 of 37 for 268 yards with a touchdown while also rushing for 95 yards on 10 carries. He did lose a fumble and threw an interception.

He also just happened to lose his effectiveness whenever Washington got near the end zone. Those red-zone struggles wasted a solid performance from Washington’s defense, which sacked Aaron Rodgers three times while playing without injured cornerback William Jackson III.

And now the defending NFC East champions find themselves three games below .500 after losing three straight.