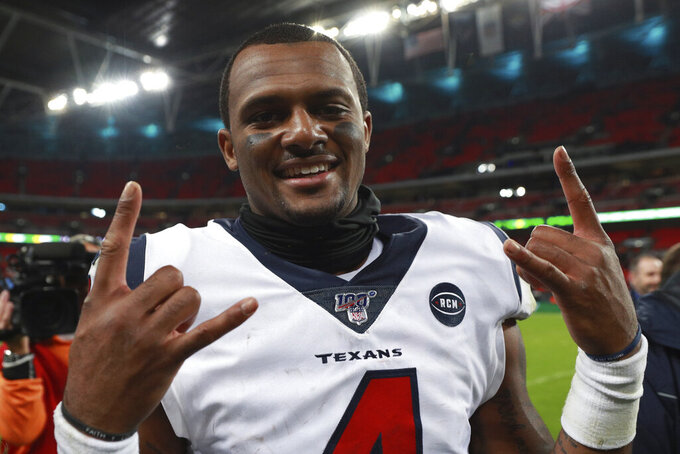 Deshaun Watson and Lamar Jackson starred three years ago in one of the more meaningful and memorable games of that college football season.

This weekend, the NFL gets to stage the show.

Watson and the Houston Texans will travel to Baltimore for a matchup with Lamar Jackson and the Ravens featuring two of the most dynamic quarterbacks in the league and both under 25. The pass-run threat posed by each already makes for good theater. What’s more, the Texans (6-3) and Ravens (7-2) have emerged as two of the strongest challengers to defending champion New England in the AFC. The Ravens beat the Patriots two weeks ago.

When Watson was at Clemson and Jackson at Louisville in 2016, the ACC opponents met in a midseason showdown of top-five teams in The Associated Press poll. Behind five touchdown passes and 397 yards of offense from Watson, Clemson won 42-36 despite a total of 457 yards and three touchdowns by Jackson.

Jackson won the Heisman Trophy that year, beating out Watson, who took the ultimate prize when the Tigers won the national championship. Watson was the 12th overall pick in the 2017 draft, and Jackson went with the 32nd overall selection in 2018. After overcoming s early obstacles, Watson with a torn ACL in his rookie year and Jackson with doubts that his slithery style would translate from college to pro, they’re both well on their way to becoming two of the best at their position.

Though they’re mutual admirers, this matchup Sunday doesn’t mean they’ll be trying to outdo the other. There’s an opposing defense to maneuver against.

“I can’t control what they’re doing on their side or what Lamar’s got going on,” Watson said this week.

Jackson has captured plenty of attention since becoming the full-fledged face of the franchise this fall. His spin move during a 47-yard touchdown run last week in a win over Cincinnati was an instant pick for the NFL’s highlight film for 2019.

“I’m a proud quarterback, proud friend,” Watson said. “All the criticism he was getting when he was coming out, he’s definitely a guy I’ve always encouraged. He’s doing everything all the naysayers said he couldn’t do and even more so. His career is very, very bright.”

Week 11 began with an outburst when Cleveland beat rival Pittsburgh 21-7 on Thursday night. The game unraveled in the final seconds with a fight triggered by a takedown of Steelers quarterback Mason Rudolph by Browns defensive end Myles Garrett. Garrett ripped off Rudolph’s helmet and smacked him in the head with it. On Friday the NFL suspended him for at least the rest of the season, the longest ban in league history for a single on-field infraction. The Browns (4-6) will try to salvage their season without Garrett, perhaps their best defensive player. The Steelers (5-5) had a four-game winning streak stopped, with Rudolph throwing four interceptions.

Christian McCaffrey has carried Carolina all season, not only on the ground but through the air. With four catches against Atlanta on Sunday, he would pass LaDainian Tomlinson for the most by a running back in his first three years in the NFL. The Panthers must face their nemesis Matt Ryan, who is 6-1 in his last seven starts against the NFC South rival.

Ryan and the Falcons showed some fight with one of the most surprising outcomes in the league this season, a 26-9 victory over New Orleans that snapped a six-game losing streak for the Falcons.

So much for that assumption the Dolphins were tanking this season to get the top draft pick. They’ve suddenly won two straight games.

“We’ve got two more wins than the rest of the world thought we were going to have this year, so that’s pretty cool,” defensive tackle Christian Wilkins said.

Miami totaled 381 yards against Buffalo in the previous meeting, the most allowed by the Bills this year. Despite losses in two of their last three games, with a win they would post their best 10-game mark since 1999. The combined record of the opponents in Buffalo’s six victories is 12-44.

Since he entered the NFL in 2016, Ezekiel Elliott has 4,836 rushing yards to lead the league. If he can reach 164 rushing yards against Detroit, he’ll be the fifth player with at least 5,000 rushing yards in 50 career games, joining Eric Dickerson, Earl Campbell, Jim Brown and Terrell Davis, all members of the Pro Football Hall of Fame. Elliott and the Cowboys, however, had their ground attack humbled last week in a loss to Minnesota. He had only 47 rushing yards, the fewest of his career with 20 or more carries. The success of quarterback Dak Prescott against the Vikings helped the Cowboys stay in the league lead in total yards.

The Lions squandered last-minute leads on Kansas City and Green Bay, dropping both games to begin a tailspin accelerated last week by the surprise absence of quarterback Matthew Stafford to a back injury. With five losses in their last six games and the likelihood of Stafford sitting out again on Sunday, the Lions are in a tough spot. Their defense has forced only one turnover over the last four games.

The Vikings, coming off a critical victory at Dallas fueled again by running back Dalvin Cook, have a prime opportunity to match their win total from last year against the struggling Broncos before taking their bye week. They’re 4-0 at home this year and 22-7 at U.S. Bank Stadium in the regular season and the playoffs. Their pass rush and the crowd noise have proved a daunting combination for opponents, particularly with inexperienced quarterbacks like Denver fill-in Brandon Allen.

Allen performed admirably in his first start for Joe Flacco, when the Broncos last played before their bye and beat Cleveland, passing for two touchdowns without a turnover. Though Denver has dropped from 10th in the league last season in sacks per pass attempt to 22nd this year — Bradley Chubb is on injured reserve, like Flacco — the Broncos still have a capable defense that could create challenges for quarterback Kirk Cousins and the Vikings. Denver has allowed an average of 18.9 points a game, seventh fewest in the NFL.

After breaking his collarbone in the season opener, Nick Foles will finally take over again at quarterback for a Jaguars team that could use a spark after a 23-point loss in London to Houston before the bye week. Not only does Foles conveniently return in a division game that’s a must to win if Jacksonville is to have a chance to remain in contention, but he will do so with his former offensive coordinator on the other side.

Colts coach Frank Reich was one of his mentors in Philadelphia, when Foles took over two seasons ago and helped lead the Eagles to their first Super Bowl title. Reich’s current team has lost two straight games since quarterback Jacoby Brissett hurt his knee. He’s expected to reclaim his starting spot Sunday.

Despite their humbling defeat at home against Atlanta last week, the Saints still have a comfortable lead in the NFC South. Wide receiver Michael Thomas leads the NFL with 86 receptions and 1,027 yards, joining Randy Moss, A.J. Green and Mike Evans as the only players in history to begin a career with four consecutive 1,000-yard seasons. Thomas had 13 catches for 152 yards against the Falcons.

The Buccaneers could be just as vulnerable, with a league-worst defense that’s allowing an average 31 points per game. No team has allowed more passing yards, either, and Tampa Bay just cut cornerback Vernon Hargreaves III.

Here’s a sign of progress for the Jets: Quarterback Sam Darnold, in last week’s win over the Giants, was not picked off for the first time since the season opener. Darnold threw nine interceptions over his other four starts this year.

Washington has lost three straight games, after the only win came against another struggling team in Miami. The Redskins haven’t scored a touchdown during the losing streak, either. They have just 45 points over their last six games.

There are no undefeated teams left. The 49ers squandered several opportunities last week against Seattle and lost in overtime amid a growing list of injuries on their offense. Fortunately for them, they’ll host a Cardinals team on a three-game losing streak.

Arizona is second-to-last in the league in scoring and total defense, with at least 21 points allowed in all 10 games.

There is one winless team remaining, with a reeling Bengals squad under rookie coach Zac Taylor having turned to rookie Ryan Finley at quarterback. One more loss would match the franchise record for the worst start to a season, established in 1993.

The Raiders have rather quietly worked their way into contention in the AFC, seeking to move two games above the .500 mark since they started 2-0 in 2017. The Raiders have a league-leading 13 touchdowns by rookies this year, led by running back Josh Jacobs.

Two of the last five times these teams faced each other came in the Super Bowl, with the memory of Feb. 4, 2018, in Minneapolis still fresh for both sides. That’s when the Eagles scored the go-ahead touchdown with 2:21 left, recovered a fumble by Tom Brady with a sack on the next possession for the Patriots, and posted a 41-33 victory that ended with a disconsolate Brady sitting down on the U.S. Bank Stadium turf following a desperation incompletion on the final play.

Brady said he’s still carrying “a lot of mental scar tissue” from that game, even though the Patriots rebounded to become the most recent NFL champions a year ago. They had their bye week to recuperate from their only loss this season, to the Ravens, and they’ll send a smothering defense with several all-time records in range out to try to make the afternoon rough for Eagles quarterback Carson Wentz. The Patriots have allowed only 10.9 points and 249.3 yards per game. Wentz, who was injured prior to the 2017 playoffs and watched Foles lead the Eagles to the franchise’s first Super Bowl win, has helped the Eagles tie the Cowboys for first place in the NFC East with two consecutive victories.

The Bears broke a four-game losing streak last week by beating Detroit behind three touchdown passes thrown by Mitch Trubisky that gave an ailing offense some life. There are still many issues to be ironed out for a team facing as daunting of a second-half schedule as any in the league, but the defense that fueled a 15-6 victory over the Rams near the end of last season by holding them without a touchdown for the first time in 30 games under coach Sean McVay remains a strength.

The Rams, fortunately, can stop other teams, too, because their once-potent attack has been stymied often this year. Since the beginning of the 2018 season, the Bears and Rams have seven defensive touchdowns apiece, tied for second in the NFL behind Baltimore. The Rams have limited their last four opponents to a total of 57 points, as the defense produced nine points all by itself last week in a loss to Pittsburgh.

This AFC West matchup moves to Mexico City for an international Monday night affair at Azteca Stadium, where heavy rain and heavy use last year left the grass unfit for NFL competition and forced a Chiefs-Rams game to be relocated to Los Angeles. The Chargers still have hope of climbing back into the chase for the division title, sitting two games behind the first-place Chiefs with the Raiders in between.

The Chiefs had quarterback Patrick Mahomes back from a knee injury last week, though they didn’t welcome him back with a win despite holding a nine-point lead midway through the fourth quarter at Tennessee. Mahomes has 8,007 career passing yards, the most through 25 starts in NFL history.