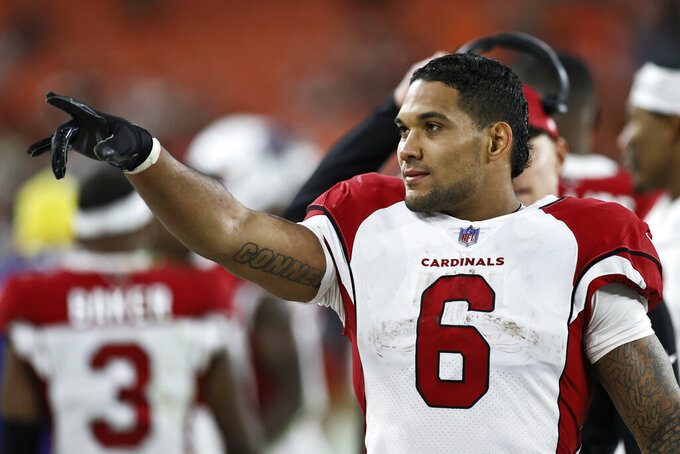 GLENDALE, Ariz. (AP) — J.J. Watt acknowledges it will be strange on Sunday when he sees the blue and white jerseys of the Houston Texans, the franchise he spent 10 years with before signing with the Cardinals during the offseason.

The star defensive end also expects to get over it quickly.

“I don't think I'm going to forget which guy I'm supposed to tackle,” Watt said with a laugh.

The entire Arizona Cardinals team will have plenty of motivation, trying to improve to 7-0 for the first time since 1974 by beating the Texans. But for two Cardinals — Watt and receiver DeAndre Hopkins — there's the added allure of playing against the franchise where they became stars.

Watt was arguably the NFL's most feared defensive player through much of his tenure for the Texans. He's a three-time NFL Defensive Player of the Year and had 101 sacks over his 10 seasons. Hopkins was a three-time All-Pro in Houston and topped 1,000 yards receiving five times in seven seasons with the franchise.

But when the Texans went into full rebuild mode over the past few seasons, Watt and Hopkins became expendable. Watt was released after last season and eventually signed a deal with the Cardinals. Hopkins was acquired by the Cardinals in a trade before the 2020 season.

The Texans (1-5) are on a five-game losing streak. Watt said Thursday he still loves the city of Houston and its fans. He said he wishes the franchise nothing but the best — at least after Sunday's game.

“I know how unbelievable the fan base is,” Watt said. “So that's why it hurts me to see where it is now. Because I believe those fans deserve to be living those high times, to be experiencing those great moments.”

The Cardinals — led by Watt and Hopkins — hope to deliver one more frustrating moment before any potential Texans success.

Texans defensive back Tremon Smith said their team is well aware that Hopkins will be particularly motivated on Sunday.

“We just try to contain him the best we can. We know what type of player he is, what type of players they have and the quarterback they have,” Smith said. "Just really focusing on ourselves and just doing our assignments, and that should seal that up.”

It's unclear how many of them will be able to return for the Texans game. Even if they can't be on the field, Watt said the win over the Browns proves the Cardinals can handle adversity.

“That shows how you can't be too reliant on one thing or another,” Watt said. “Your head coach goes down, you have to have people willing to step in, ready to step in and capable.”

The Texans will be down one more veteran Sunday after releasing defensive end Whitney Mercilus this week. He was the 26th overall pick in the 2012 draft and spent his entire career with the Texans. Mercilus was one of the longest-tenured players on the team after most of Houston's stars have been traded or released in recent years.

Coach David Culley said the parting was a mutual decision to give Mercilus a chance to sign with another team and the Texans more freedom to give some young players more playing time. Mercilus wound up in Green Bay.

Arizona's new tight end Zach Ertz is expected make his debut on Sunday after being acquired in a trade with the Philadelphia Eagles last week.

The three-time Pro Bowl selection fills a need after Maxx Williams was lost for the season because of a knee injury on Oct. 10. The 30-year-old Ertz has 38 career touchdown receptions and is still playing at a high level.

“What an opportunity it is being on this football team,” Ertz said, “6-0 and playing great football.”

Rookie quarterback Davis Mills believes he’s improved in his 4 ½ games as a starter, but he’s still looking for that elusive first win.

“I’ve definitely seen progress,” he said. “It’s a challenge every week, but I’ve tried to acknowledge the mistakes I’ve made and learn from them and continue to grow as a better player.”

He knows that the key to success will be to take better care of the ball after throwing seven interceptions this season, tied for third most in the NFL.