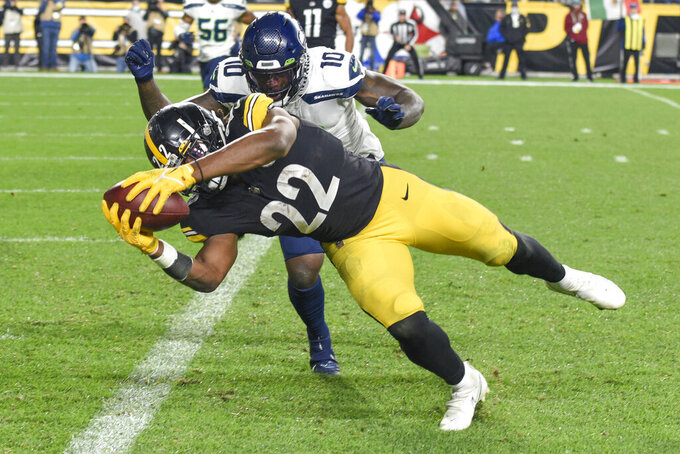 Pittsburgh Steelers running back Najee Harris (22) dashes past Seattle Seahawks defensive end Benson Mayowa (10) on his way to the end zone and a touchdown during the first half an NFL football game, Sunday, Oct. 17, 2021, in Pittsburgh. (AP Photo/Don Wright)

PITTSBURGH (AP) — Pittsburgh Steelers coach Mike Tomlin insists there is nothing “mystical” to the way outside linebacker T.J. Watt goes about his business.

The perennial All-Pro is talented. He's focused. He's relentless. And as of last month, he's also one of the highest-paid defenders in the NFL.

Watt strip-sacked Seattle quarterback Geno Smith in the waning minutes of overtime on Sunday night. Teammate Devin Bush pounced on the loose ball to set up Chris Boswell's game-winning 36-yard field goal as the Steelers escaped with a 23-20 victory.

“I don’t think anyone is surprised about his ability to deliver in those moments,” Tomlin said of Watt.

Maybe, but Watt's second sack of the night, the one that helped the Steelers (3-3) win their second straight to reach .500 heading into their bye week, began innocently. Watt wasn't sure he had a path to Smith only to somehow thread his way to the former starter turned longtime backup. One mighty chop at Smith's right arm and the ball was on the ground.

“I don’t think I had a good rush or anything,” Watt said.

In the end, it didn't matter. Watt finished a remarkable game in which he knocked down three passes and recorded three tackles for loss by making the play that allowed Pittsburgh to avoid a deflating setback.

The Steelers have won two straight following a 1-3 start and will have two weeks to get ready for a visit to Cleveland on Halloween.

“It's kind of crazy, don’t know if it’s really sunk in yet,” quarterback Ben Roethlisberger said. "We got to our goal, which was to get to .500 before the bye, get healthy and get prepared for a long stretch.”

Roethlisberger threw for 229 yards and a touchdown and rookie running back Najee Harris added 83 yards rushing and caught his second scoring toss of the season. Eric Ebron scored the third rushing touchdown of his career as the Steelers found creative ways to move the ball with star wide receiver JuJu Smith-Schuster lost for the season with a shoulder injury.

“We've got a lot of players that can make plays,” said Pittsburgh wide receiver Diontae Johnson, who caught nine passes for 71 yards. “They showed that.”

Smith, starting in place of injured Russell Wilson, completed 23 of 32 passes for 209 yards and a touchdown in his first start in nearly four years. Alex Collins ran for 101 yards while filling in for injured starter Chris Carson, the first 100-yard rushing game by a Seahawk since Dec. 15, 2018.

“I thought he played tough as hell,” Seattle coach Pete Carroll said of Smith. "He was clear and calm and poised exactly like you’d hope he’d be. The game was not too big for him at all.”

The Seahawks played the final 3:10 of regulation and overtime without linebacker Darrell Taylor, who left on a stretcher and was taken to the hospital with an undisclosed injury. Taylor fell to the ground during a 3-yard gain by Harris with the Steelers driving near midfield. Taylor was on the ground for more than 10 minutes while being attended to by medical staff. Players from both sides came out to offer support.

Coach Pete Carroll said after the game that Taylor's preliminary CT scans were clear. The team said Taylor had feeling in all of his extremities and the 24-year-old rookie was expected to fly home with the team.

“He was so mad to be taken off the field like that. He wanted to get up,” Carroll said. “They wouldn't let him do it, because they had to do all the secure methods to take care of him. He didn't want any part of that.”

Seattle was trailed by three with time winding down in regulation when driving when Smith connected with D.K. Metcalfe near the Seahawks sideline. Rather than step out of bounds with his team out of timeouts, Metcalfe opted to turn upfield. The ball was stripped out of his hands by Pittsburgh's James Pierre. Seattle wide receiver Freddie Swain fell on it at the Steelers 25.

Smith scrambled to get the Seahawks to the line of scrimmage and appeared to spike the ball with a second left. Officials, however, halted the game to review whether Metcalfe caught the pass inbounds. The call stood on review and the game clock was reset to 3 seconds, giving Smith enough time to spike it so Jason Myers could come on and pull the Seahawks even at the gun with a 43-yard field goal.

Steelers head coach Mike Tomlin, who is on the NFL's competition committee, called the review “an embarrassment.”

“I hated it. I hated it,” Tomlin said. "I cannot believe that game was stopped to confirm catch/no catch in that moment.”

Pittsburgh: Are off next week, then travel to Cleveland to take on the Browns on Oct. 31. Cleveland took two of three meetings with Pittsburgh in 2020, including a blowout victory in the first round of the playoffs.