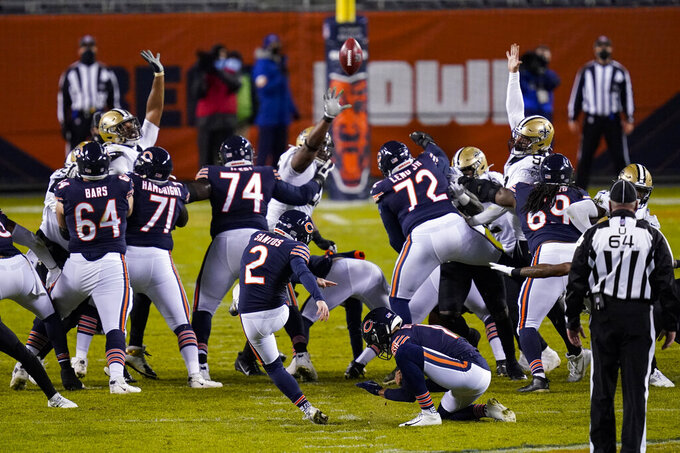 Chicago Bears kicker Cairo Santos (2) kicks a field goal to tie the game with the New Orleans Saints in the closing seconds of the second half of an NFL football game in Chicago, Sunday, Nov. 1, 2020. (AP Photo/Charles Rex Arbogast)

CHICAGO (AP) — Drew Brees and the New Orleans Saints kept their cool in another tight spot and again came away with a narrow victory.

The Bears’ Cairo Santos made a 51-yard field goal at the end of regulation to force the extra period.

“Battle tested,” Brees said. “That's what (our identity) is — battle tested. No matter what situation we find ourselves in, we're gonna be able to draw on a lot of these other moments where we had to find a way to win.”

The victory was the Saints' third in a row by three points. Their only double-digit victory was when they beat Tampa Bay 34-23 in the opener.

The Saints had a first down at the 16 with 1:40 remaining when coach Sean Payton called on Lutz rather than run the clock down. He came through with his fourth field goal on a windy day, sending the Bears (5-3) to their second straight loss. New Orleans tied Tampa Bay for the division lead, with Brady and the Buccaneers meeting the struggling New York Giants on Monday night.

“My gut, we’re on the field and I feel like we can kick a field goal at that distance without risking any ball-security issues,” Payton said. “I recognized we could’ve run the clock down.”

After the Saints went three-and-out, Chicago tied it with 13 seconds left on Santos’ field goal into the wind. But coach Matt Nagy was clearly frustrated after the game.

“I want it so bad for these guys, I want it for the city, I want it for the organization," he said. “I care a lot about all of that that I just said, so it’s emotional at the end of a game when you fight like this and you’re playing against a good football team and a Hall of Fame quarterback.”

Brees picked apart the Monsters of the Midway, completing 31 of 41 passes for 280 yards. Along with the TD to Hill in the fourth, he threw a 16-yarder to Jared Cook in the closing seconds of the first half to cut Chicago’s lead to 13-10. Brees now has 560 TDs in his career, with Brady at 559.

Alvin Kamara joined Matt Forte and LaDainian Tomlinson as the only running backs in NFL history with 50 or more receptions in each of his first four seasons. The three-time Pro Bowl pick had nine catches — giving him 55 on the year — for 96 yards. He also ran for 67 yards, and the Saints won their sixth in a row against the Bears.

Foles was 28 of 41 for 272 yards with two touchdowns and an interception.

Allen Robinson, who spent most of the week in the NFL’s concussion protocol, had a sprawling 24-yard TD reception in the back of the end zone in the second quarter. Rookie Darnell Mooney added a career-high 69 yards receiving and a touchdown.

David Montgomery ran for a season-high 89 yards, but the Bears came up short after getting dominated by the Los Angeles Rams on Monday night.

Bears quarterback Mitchell Trubisky made his first appearance since Foles replaced him in Week 3, running for 3 yards on his lone play.

Saints: DT Sheldon Rankins (knee) left late in the first half. ... WR Michael Thomas, the 2019 AP Offensive Player of the Year, missed his sixth straight game because of two separate injuries sandwiched around a one-game suspension.

Bears: DT John Jenkins (ankle) exited in overtime. ... RT Bobby Massie (knee) left after he was hurt blocking a run on Chicago’s first possession of the game and walked off the field gingerly. ... DE Roy Robertson-Harris (shoulder) left in the first half. ... C Cody Whitehair (calf) was inactive after leaving Monday’s loss to the Rams.