Wilson can't come through for Seattle to conclude wacky week 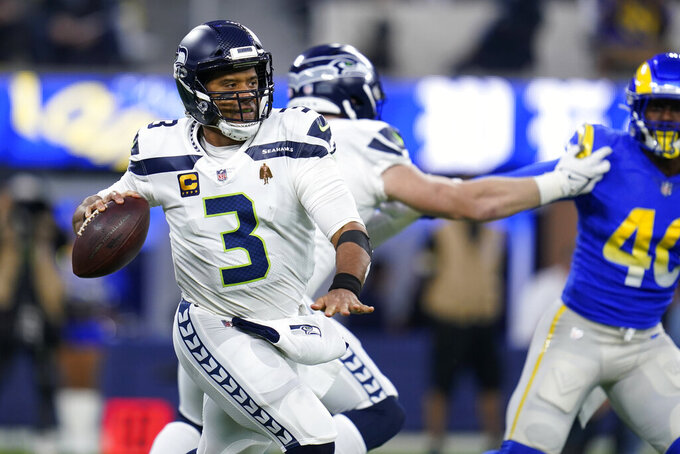 Seattle Seahawks quarterback Russell Wilson looks to throw during the first half of the team's NFL football game against the Los Angeles Rams on Tuesday, Dec. 21, 2021, in Inglewood, Calif. (AP Photo/Ashley Landis)

RENTON, Wash. (AP) — With their schedule for the week thrown out of whack, their top wide receiver out because of COVID-19 and their playoff hopes on the line, the Seattle Seahawks needed their franchise quarterback to be at his best.

Instead, Russell Wilson failed to meet the moment in Tuesday's 20-10 loss to the Los Angeles Rams that likely ended any hopes of the Seahawks making the playoffs.

Seattle (5-9) is guaranteed of finishing with a losing record for the first time in Wilson’s career. The Seahawks aren’t officially eliminated from the postseason, but would need an unlikely set of circumstances to play out over the final three weeks to reach the playoffs.

The opportunity was there to keep Seattle's postseason hopes alive against the Rams. This wasn’t a game where the Seahawks were overwhelmed and it turned into a blowout.

Wilson didn’t need to be spectacular or extraordinary. Wilson simply needed to be what he’s proven over the years to be capable of in similar situations — good enough in the important moments to lift the Seahawks to a needed victory.

Wilson was 17 of 31 passing for 156 yards and the incompletions loomed large. There was the missed deep ball to DK Metcalf that seemed to be a sure touchdown. There was missed connections to Dee Eskridge and errant underneath throws to Metcalf. Wilson was hampered by not having Tyler Lockett available because of COVID-19, but opportunities were there.

And those missed chances made a handful of key penalties — or no calls — loom larger and have a greater impact on the outcome.

“We’ve got to be better in all phases is the first thing, and it’s not just one guy,” Seattle coach Pete Carroll said.

The turnaround by Seattle’s defense from where it was at the start of the season continues to be notable. The Seahawks have gone nine straight games holding their opponents to 23 points or fewer. Seattle allowed 476 total yards in Week 5 against the Rams, but held them to 332 on Tuesday. The 332 total yards were second fewest this season for the Rams. It wasn’t all perfect for Seattle’s defense giving up 6 of 12 third-down conversions and allowing 123 yards rushing, but considering where the record pace for futility the Seahawks were on to start the season it’s a notable accomplishment.

For the second time in three weeks, Carlos Dunlap was the most impactful defensive player on the field for Seattle. Dunlap tied his career high with three sacks against the Rams, doubling his output for the entire season entering Tuesday’s game. Dunlap was invisible at times earlier in the season and saw his playing time decrease significantly in November, bottoming out with just four snaps played against Washington. Dunlap played 21 snaps against the Rams.

RT Brandon Shell missed his second straight game because of a mix of a shoulder injury and landing on the reserve/COVID-19 list. So his “stock down” is less to do with his performance as that of undrafted rookie Jake Curhan, who for the second straight game looked more than capable of filling in at right tackle. Shell has played well and played through several injuries during his two seasons with Seattle, but is a free agent after the season. Curhan may have a chance over the final few weeks to prove to be the solution going forward.

The biggest questions for Seattle relate to the players on its reserve/COVID-19 list and how many — if any — are cleared in time for Sunday’s game. Seattle got one player back on Wednesday when RB Alex Collins was activated, but TE Will Dissly was added to the reserve/COVID-19 list. Lockett and cornerback D.J. Reed also remained on the COVID-19 list. ... The one notable injury to come from Tuesday’s game was reserve LB Jon Rhattigan, who suffered an injury to his ACL, but Carroll said he did not know the severity.

13 — That’s the number of interceptions for Quandre Diggs since being acquired via trade midway through the 2019 season. Diggs picked off his fifth pass of the season on Tuesday. Diggs will be an unrestricted free agent after the season.

While not officially eliminated from playoff contention, the Seahawks begin a stretch of three meaningless games on Sunday hosting Chicago. It’s a brutally quick turnaround for a game with almost no significance played the day after Christmas to what should likely be a mostly apathetic crowd. Perhaps one of the rallying points for Carroll will be Seattle winning at least seven games in every season of his tenure. The Seahawks must win two of the final three to make that happen again.