Wrestling, of course, is topic at offbeat NFL media night 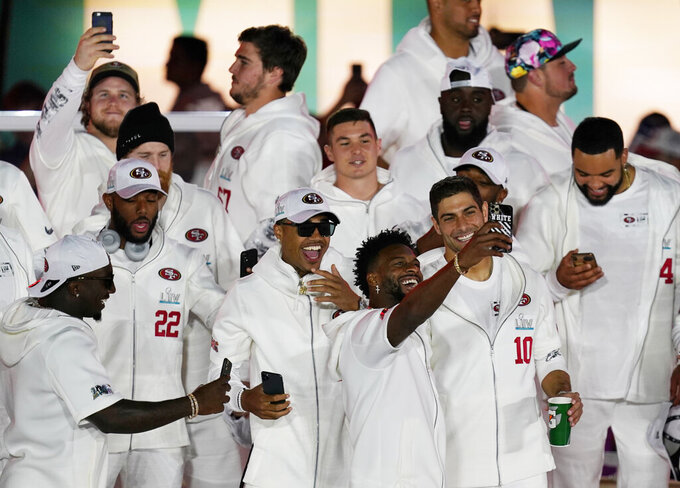 MIAMI (AP) — Roman Reigns went from the Royal Rumble to the Super Bowl.

The WWE star was in Miami for the opening night festivities at Marlins Park a night after wrestling in the Royal Rumble match in Houston, where he was the last competitor eliminated by eventual winner Drew McIntyre.

Kittle is a huge wrestling fan, and uses a gesture to celebrate first downs that he borrowed from Pentagón Jr., a Mexican wrestler. Kittle makes a circle with his thumb and forefinger to form a “0” and then flicks his wrist so his other fingers form an “M” for Pentagón Jr.’s catch phrase: “Cero miedo” — or, “zero fear.”

Kittle caught some of the Royal Rumble action on TV after the 49ers got into Miami on Sunday night as they begin to prepare to face the Kansas City Chiefs.

“I loved it when you all just beat the crap out of Seth (Rollins),” Kittle told Reigns with a huge smile. “That was awesome. That was fun.”

Reigns then asked Kittle who on the 49ers would win a Royal Rumble among teammates. The wrestler told the tight end most of the 49ers said Kittle would take home the belt.

So, who would go out first?

That surprised the 49ers quarterback.

“George?” Garoppolo said. “Who said that?”

Reigns told him “everybody,” and then asked who’d be tossed out of the ring first.

Chiefs wide receiver Tyreek Hill doesn’t have any advice for Tom Brady with the six-time Super Bowl champ seemingly set to test free agency in March for the first time in his long career.

Hill says if he ever got a chance to talk with Brady, he’d ask to train together so he could learn from him. Why? Hill says Brady has played with Randy Moss, Donte Stallworth and Joey Galloway.

“He played with all kind of GOATs, man, at receiver,” Hill said. “He got a chance to throw at those guys and for me to pick his brain a little, I wouldn’t mind. I’d do it all day.”

SHUT UP AND DANCE WITH ME

Patrick Mahomes can throw as well as anyone and even showed off his skills as a runner in the AFC title game for the Kansas City Chiefs.

There are some things he's not quite as skilled at.

"The only thing he can't do is maybe dancing," teammate Sammy Watkins said. “He can do everything, every sport, any game, any board game, whatever.”

Well, Mahomes tap-danced quite nicely down the sideline on his go-ahead TD against Tennessee.

Chris Jones probably isn't the best guy to have on your team for a Super Bowl trivia night.

He only started watching the game about three years ago.

You see, the Chiefs defensive tackle didn't even start playing football until the 11th grade, and even then he played for only a half-season. But the 6-foot-6, 310-pounder with the agility of a ballerina and the mean streak of a saltwater crocodile turned out to be pretty good at it, and quickly became a five-star prospect before committing to Mississippi State.

He played three seasons there before entering the NFL draft, when the Chiefs picked him in the second round, and it finally dawned on him that he might want to watch the game everyone was trying to reach at the end of the season.

Better than watching it? Playing in it. That's what he'll be doing against San Francisco on Sunday night.

Another sport made its way onto the Florida Marlins' field at media night. No, not baseball. Boxing — sort of.

A representative of DAZN, the streaming service, carried a mini Rock'em Sock'em Robots game and challenged just about anyone to give it a try.

One Kansas City Chief, safety Jordan Lucas, was willing, but his robot didn't fare too well. Lucas can only hope he and his team stand up better against the 49ers on Sunday.