Young has mixed emotions over trade from Rams to Broncos 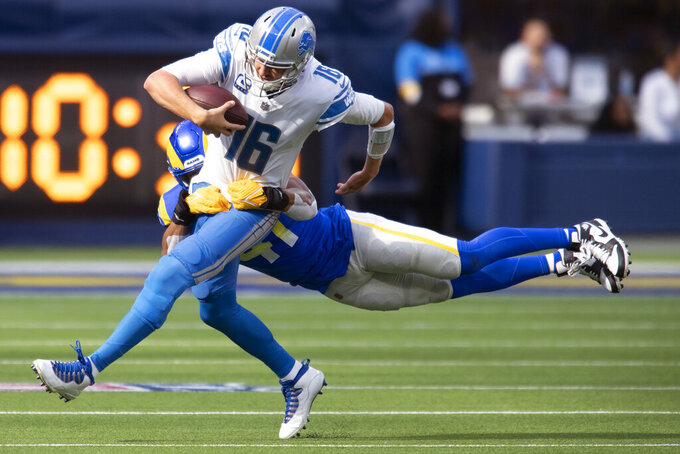 ENGLEWOOD, Colo. (AP) — Kenny Young is trying to clear his mind even while his head is swimming.

The fourth-year linebacker is taking a crash course in Denver's defense while juggling the emotions of the trade that sent him from the rolling Rams (6-1) to the reeling Broncos (3-4).

Young insisted he wasn’t caught off guard by Monday's trade.

“No, I’ve been traded before,” said Young, whom the Rams acquired from Baltimore in October 2019 in the deal that sent Marcus Peters to the Ravens.

Even so, he acknowledged some disappointment.

“I mean, we were a team that was on a run and I played a very good game and it was just confusing for me for a second," Young said Wednesday in his introductory podium appearance at Broncos headquarters.

Rams coach Sean McVay called it a “really tough decision” to part with his second-leading tackler, but said the trade was driven by the need for financial flexibility by a team that's hard up against the salary cap.

“Yeah, it didn’t have anything to do with my on-the-field ability or anything like that," Young said. "I was playing well. It was about finances. I’m not cool with it, but I have to respect it because they had no other choice.”

The Rams saved $1.33 million in salary and opened up playing time for rookie Ernest Jones while the Broncos acquired a playmaker to help them at a position that's been hard hit by injuries.

Both starters at inside linebacker — Alexander Johnson and Josey Jewell — are out for the season with torn pectoral muscles, and several backups are banged up.

“You're always excited because you have a welcome new home, but as a human — the human side of it, right? — I am feeling mixed emotions,” Young acknowledged. “But you know I feel like there's light at the end of this tunnel. I don't know how that shapes up, but I'll do my part and I'll leave it to God to do the other half and somehow it will work itself out."

A fourth-round draft pick out of UCLA in 2018, Young was a key defensive playmaker for the Rams, having started all seven games, a career high. He ranked second on the team with 46 tackles, including a team-best six for loss in his breakthrough fourth NFL season.

His tackle total this season is five shy of his career high set last year. His best game came last month against Tampa Bay in which he had 10 tackles, eight of them solo, three tackles for loss, a sack of Tom Brady, a forced fumble and an additional quarterback hit.

He had another stellar outing Sunday with seven tackles, including one for a loss, a sack and another quarterback hit in the Rams' 28-19 win over the Lions.

The Broncos are trying to dig out of a four-game losing streak that led quarterback Teddy Bridgewater on Wednesday to say, “You know, it's not time to panic, but it almost is.”

Young is intent on helping turn things around in Denver.

He called the Broncos a “great organization known for playing some phenomenal defense (with) phenomenal linebackers. These guys just won a Super Bowl not too long ago. So, there's a lot of good things going over here. I'm excited to be a part of it. It's a place where I also can fit it, and that's good enough.”

The Broncos are hopeful that both Young and outside linebacker Stephen Weatherly, acquired over the weekend from Minnesota, will get up to speed in time to play against Washington (2-5) this weekend.

Young played for Brandon Staley, a Vic Fangio defensive disciple, when he was the Rams defensive coordinator in 2020. His experience with Staley, now the Chargers head coach, should accelerate his learning curve.

Asked if it would help him to start or at least get significant snaps Sunday, Young said, "I really don't know, man. These past 72 hours have been a whirlwind honestly. I'm just here trying to learn as much as I can, trying to get caught up on things. It is some similar schemes, just different verbiage.”

“I think I'll be fine,” Young concluded. “I've played enough ball. I'm pretty comfortable in my preparation and my process to get myself going. But like I said I'm only focused on today."