From AirPods to airing it out: Murray learns the ways of NFL 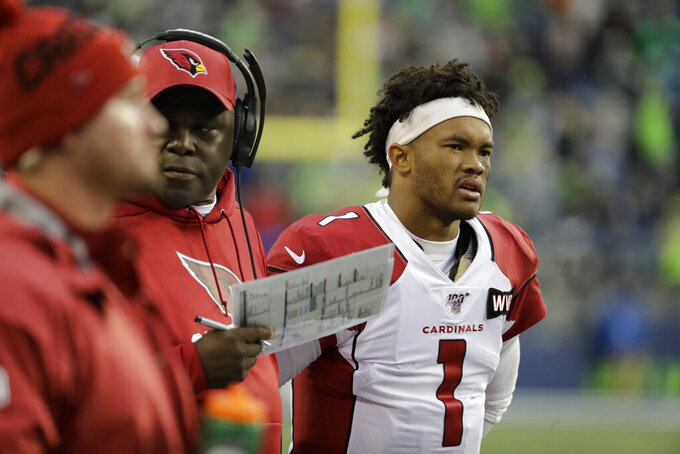 In this Dec. 22, 2019, photo, Arizona Cardinals quarterback Kyler Murray stands on the sidelines during the second half of an NFL football game against the Seattle Seahawks in Seattle. Murray's impressive first season is early proof that the Arizona Cardinals made a good decision when they selected the quarterback with the No. 1 overall pick in April. (AP Photo/Lindsey Wasson)

TEMPE, Ariz. (AP) — Quarterback Kyler Murray spent his rookie season with the Arizona Cardinals dealing with issues big and small: Becoming a leader, reading defenses, studying film and knowing when to use his speed.

Even where to put his AirPods on Sunday mornings so he doesn't forget them and wreck his pregame routine.

“I was already like five minutes away from the house," Murray said with a wry smile, adding it was too late to turn around. "It was tough. That was a tough morning.”

It was one of his few bad moments in a promising season for the 22-year-old, who was selected by the Cardinals with the top pick despite being short for an NFL quarterback at 5-foot-10. His height hasn't been an issue through 15 games and he's mostly thrived under first-year coach Kliff Kingsbury and his “Air Raid”-style offense.

The Cardinals are in a good mood these days after winning two straight games against the Browns and Seahawks and improving to 5-9-1 for the season. The surge came too late to get into the playoff race, but there's hope within the organization that better days are ahead in 2020.

Kingsbury and Murray have grown together throughout the past four months, learning how to communicate and work through the game plan so that the Cardinals are at their best on Sundays. The 40-year-old coach said Murray — who many describe as friendly but a little introverted — is slowly learning the difficult task of becoming the face of an organization.

“I think until you’re in that seat and feel that type of all-encompassing pressure each and every day, you don’t know what it is,” Kingsbury said. "Then you have a bunch of grown millionaires looking at you for direction and leadership and how you carry yourself, and that’s a lot to walk into. I just think the comfort level of being able to handle that every day and that expectation on him every day.

"This franchise goes as he goes, whether it’s in a meeting or at practice or in a game. I think he’s growing into that.”

He's also growing into quite a quarterback when it comes to things on the field. He's thrown for 3,397 yards, 18 touchdowns and 10 interceptions while also running for 544 yards and four touchdowns.

He tweaked his right hamstring in a win against Seattle and Kingsbury said Murray is “day to day" for the season finale against the Los Angeles Rams. Even if he can't play on Sunday, his impact has already been noticed: He was selected as a Pro Bowl alternate last week.

Murray — as usual — took the news in stride.

“I’ve always been a level-headed guy,” Murray said. "I’ve had a lot of accolades throughout my career, but that hasn’t really changed me. I know that comes with the winning. If we win, a lot of guys are going to be noticed. That’s my main focus is winning at the end of the day. If guys get recognized, they get recognized. It’s obviously a great deal individually, but I’m trying to win.”

Murray's favorite target this season has been veteran receiver Larry Fitzgerald, who has 71 catches for 759 yards and four touchdowns. He has played with some great quarterbacks during his 16 seasons and says Murray has every chance to be just as good, if not better.

Fitzgerald said “playing quarterback in the National Football League is the hardest thing to do in sports" and that Murray's physical talent and maturity have allowed him to have success immediately.

“He doesn't really get too high or too low,” Fitzgerald said. "He has unbelievable confidence in his ability to make throws and be able to escape with his feet. The way he is, his mentality serves him well.

“There's nothing I would change about him.”

Former NFL quarterback Rich Gannon said he's seen a “unique skill set” that suggests Murray will be a good NFL quarterback for a long time. The current CBS Sports analyst added that the onus is on Cardinals' management to build an offensive roster that plays to his strengths.

“That wide-open spread is a little unorthodox,” Gannon said. “If you’re going to play that kind of offense, you’ve got to draft and get the personnel you need. But (Murray) has a lot of good qualities — intangibles, tough, gritty, smart — and he makes all the throws. He’s learning.”

Kingsbury said Murray's continued improvement is crucial. The coach added that the 13-win Baltimore Ravens and MVP candidate Lamar Jackson provide a great blueprint for how a quarterback can make a huge leap between years one and two.

“I know they have a fantastic roster and a great team, and they’ve been doing it a long time,” Kingsbury said. "But you see what Lamar (Jackson) was in that last playoff game, the previous season walking off the field, to what he is now. We’d love to take that next step with a young quarterback and build it around him and have that type of success.

"That’s obviously reaching high, but there’s a pretty good example right there at the top of the NFL right now.”

Murray has no problem with his coach's ambitious expectations. He has them, too.

“I don't play to be mediocre," Murray said.