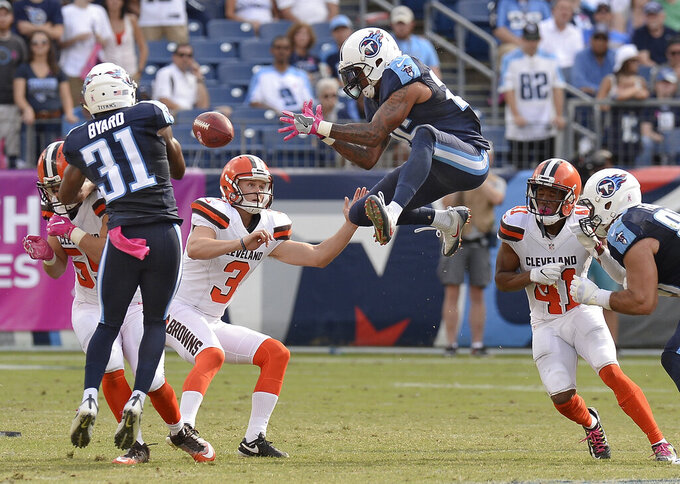 FILE - In this Oct. 16, 2016, file photo, Tennessee Titans' Rashad Johnson, center, and Kevin Byard (31) try to control an onside kick by Cleveland Browns' Cody Parkey (3) during the second half of an NFL football game in Nashville, Tenn. The Browns recovered the ball on the play. The NFL desperately is seeking ways to eliminate the more dangerous plays, and the onside kick has been deemed one. It occurs rarely, and in recent years with alterations to alignments and run-ups, the probably of it succeeding has plummeted. So Eagles owner Jeffrey Lurie suggested giving teams an alternative. They could still try the onside kick, or they could opt for a fourth-and-15 play from the kicking team's 25-yard line. (AP Photo/Mark Zaleski, File)

For a league that took so many years to find a catch rule that makes sense — we think the current one does that — it can't be a surprise that the somewhat radical proposal of an alternative to the onside kick has been tabled.

No, fourth-and-15 is not a dead issue, and very likely will be revisited in March. That's when, pending developments with the coronavirus pandemic, the owners would vote on rules changes or additions.

While the idea presented by the Philadelphia Eagles has merits, it also is gimmicky. And as competition committee members Rich McKay and Troy Vincent — two of the league's most influential executives — pointed out, it raises lots of questions.

“Rules like this that are substantial in nature, they typically take some time," says McKay, president of the Atlanta Falcons, "and this is one of the reasons: People will raise questions and say ‘why?’ and ‘explain’ and you’ve got to come back with answers.”

The NFL desperately is seeking ways to eliminate the more dangerous plays, and the onside kick has been deemed one. It occurs rarely, and in recent years with alterations to alignments and run-ups, the probability of it succeeding has plummeted. It always was a big gamble, but less than 10% of them have worked in the last two seasons.

So Eagles owner Jeffrey Lurie suggested giving teams an alternative. They could still try the onside kick, or they could opt for a fourth-and-15 play from the kicking team's 25-yard line (barring penalties on the previous scoring plays that would be applied on the kickoff). Convert and you keep the ball, with a limit of two attempts in regulation time only.

Not ready for prime time? Apparently so.

“I thought that (what) was a real healthy discussion was the ability to advance that play, defensively," Vincent says, pointing out one consequence of fourth-and-15. "Where on an onside kick, there’s no advancement.”

“This would have been a substantial change the way it was written up, and I give credit to Jeffrey. He addressed it, he heard from his colleagues and made adjustments just over the last two weeks to the amendment.

“But things of that nature — ‘Well, if you can’t advance this, is it truly fair?’” Vincent adds options on onside kicks as opposed to fourth-and-15 scrimmage players, "and you start looking at point margin, and is it only the team having the ability to have the option twice? Or can a team have it for only just being behind (on the scoreboard)? Those were some of the things that jumped out. Those are things we really need to go back and say, ‘What kind of fundamental change does this actually happen to the game?’”

Changes are substantial enough that further discussion is required. Also remember this is a league that took years to adopt the 2-point conversion. Decades to move back the extra point kick after it became as automatic as the Browns not making the playoffs.

Plus, of course, all those alterations to the catch rule that took it from confounding to, well, more confounding.

“We probably talked some 20-30 minutes on that and ended up tabling it," McKay says. "Just taking a little bit of an understanding of where teams stood on it, the questions they had on it. The commissioner has asked us as a committee to make sure we get all feedback from the teams, where they are, and are there ways to address this type of proposal and bring it back at some point? So that’s what we’ll do as a committee.

“Although we didn’t take a formal vote, we probably had more clubs that support this year (than in the past). It’s a change, and so as a change mark there were a lot of really good questions about the impacts of all the nuances of the rule, and how that may affect the end of a game. It was a good discussion.

“Rules like this take time. It took us a long time to make a change like the extra point. This is a pretty major change in giving the offense the ball on fourth-and-15. There’s a lot of things to talk through and that’s what we did today.”