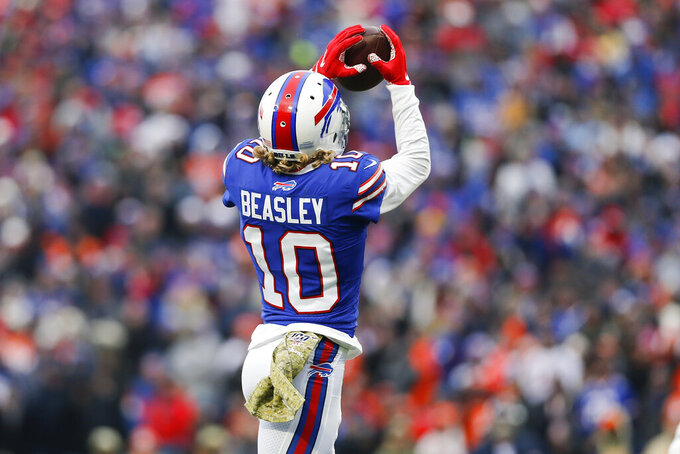 Buffalo Bills wide receiver Cole Beasley (10) make a catch on his way to score a touchdown against the Denver Broncos during the third quarter of an NFL football game, Sunday, Nov. 24, 2019, in Orchard Park, N.Y. (AP Photo/John Munson) 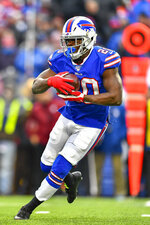 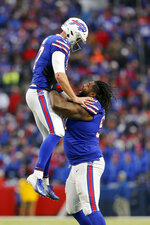 ORCHARD PARK, N.Y. (AP) — There was no holding back Shaq Lawson on the field.

And there was certainly no way to stop the ever-talkative Buffalo Bills defensive end from expressing his excitement following a convincing 20-3 win over the Denver Broncos on Sunday.

Lawson had two of Buffalo’s four sacks and the Bills improved to 8-3 to match their best record through 11 games since Hall of Fame quarterback Jim Kelly’s final season in 1996.

A vast majority of the fourth-year player’s teammates could say the same thing.

For a franchise that began the 2000s bumbling through a 17-year postseason drought, the new-look Bills suddenly have a shot to make the playoffs for the second time in three years.

And they’re doing so by delivering on the methodical plan to rebuild through youth put into place following the arrival of general manager Brandon Beane and coach Sean McDermott in 2017.

Signs of the Bills acquiring an identity continue to be evident on both sides of the ball.

The game-turning play came near the end of the first half, when cornerback Tre’Davious White snuffed out a touchdown threat by intercepting Brandon Allen’s pass intended for Courtland Sutton at the Buffalo 8.

And the Josh Allen-led offense, featuring nine new starters, is showing signs of having found a rhythm since coordinator Brian Daboll introduced a hurry-up element to its attack in a 37-20 win at Miami a week earlier.

After wearing down the Broncos with 12- and 17-play field-goal drives to open the game, Allen hit Cole Beasley for an 18-yard touchdown pass on Buffalo’s first drive of the second half. He then sealed it by completing a 34-yard touchdown pass to a diving John Brown.

“I think we started hitting our stride at the right time. We just have to keep rolling,” Beasley said. “We’ve been doing it in practice, and I think Josh is a lot more comfortable doing it that way.”

Allen finished 15 of 25 for 185 yards with an interception. He oversaw a unit that finished with 424 yards for a second consecutive week. And Buffalo’s running game found its stride with 244 yards rushing — it’s best outing since Week 16 of 2016.

Frank Gore added 65 yards rushing to up his total to 15,289 and move ahead of boyhood idol Barry Sanders into third on the NFL career list. The 15-year veteran also increased his total to 19,154 yards from scrimmage to pass Marshall Faulk for fourth on the list.

It was demoralizing outing for the Broncos, who dropped to 3-8 under first-year coach Vic Fangio, and second time in three years.

“We just got whipped today,” linebacker Von Miller said. “Nothing surprised us. We just got beat.”

And it might be time for Fangio to look to the future after Brandon Allen went 3 of 14 for 4 yards in the second half and finished 10 of 25 for 82 yards passing with an interception.

Allen dropped to 1-2 in three starts after Joe Flacco sustained a season-ending neck injury. And Allen's replacement is already waiting in the wings.

Rookie second-round draft pick Drew Lock has spent the past two weeks practicing since being sidelined in August by an injury to his right thumb.

Fangio said he’s not given any thought about making a switch. The clock, however, is ticking. Lock would remain on IR the rest of the season if he’s not activated by Dec. 3.

Allen, meanwhile, said, the decision’s not his to make.

“Obviously, I want to play,” he said. “I want to be part of the solution.”

Allen threw his first interception in 172 consecutive attempts late in the second quarter, when he sailed a pass over the middle intended for Brown. He was picked off by safety Justin Simmons.

It was Allen's first interception since the third quarter of a 14-7 win at Tennessee in Week 5. And it was also Buffalo's first turnover in three-plus games. The Bills had never gone four straight without a turnover.

Miller picked up his sixth sack of the season, and 104th of his career, by bringing down Allen for a 5-yard loss in the first half. Allen became the 51st player sacked by Miller.

Broncos: Linebacker Josey Jewell hurt his ankle. Cornerback Duke Dawson did not return after being evaluated for a concussion.