Bills’ newfound offensive identity to be tested by Broncos 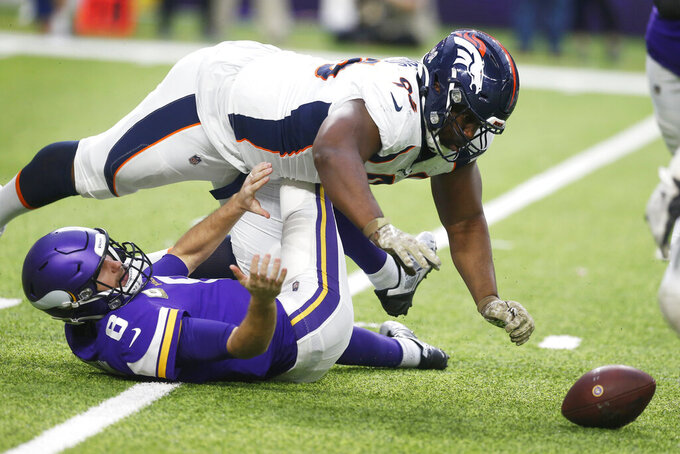 Minnesota Vikings quarterback Kirk Cousins (8) fumbles as he is sacked by Denver Broncos defensive tackle Shelby Harris (96) during the first half of an NFL football game, Sunday, Nov. 17, 2019, in Minneapolis. The Broncos recovered the fumble. (AP Photo/Jim Mone)

ORCHARD PARK, N.Y. (AP) — Buffalo Bills center Mitch Morse expressed a brief sense of satisfaction. He didn't have to spend yet another week addressing the same old questions regarding the offense's shortcomings.

For once, Morse could point to actual signs of the Josh Allen-led unit approaching its potential following a breakout four-touchdown and season-best 424-yard outing in a 37-20 win at Miami that has Buffalo (7-3) off to its best 10-game record in 20 years.

"It's just fun putting points up," he said. "It's satisfying."

Morse, however, is well aware how one week's romp doesn't guarantee another, especially given his familiarity with Von Miller and the Denver Broncos coming to town Sunday.

"It's one game. We're very proud of it," said Morse, who spent his first four seasons with the Broncos' AFC West-rival Kansas City Chiefs. "As quickly as we did well, we could get stagnant. So, for us, it's understanding we are playing a very good defense."

The Broncos (3-7) have their issues, particularly when it comes to fourth-quarter meltdowns. Denver has now blown four fourth-quarter leads, including last week's 27-23 loss at Minnesota, in which the Broncos became the first team in five years to squander a 20-point lead entering halftime.

And yet, the Broncos under first-year coach Vic Fangio are still dangerous enough to have held a lead over all but two opponents, and feature a defense ranked fourth in the NFL in yards allowed, and tied for seventh in points allowed.

"I don't have to convince them they were close. You were all there. It was close and it's been close a lot of times," Fangio said, referring to the loss to the Vikings. "You can see the effort that we're giving on Sundays, so I think (a breakthrough) will happen."

Denver is in jeopardy of going 3-8 for the second time in three years. Buffalo hasn’t had at least eight wins through 11 games since 1996.

Allen dismissed questions about whether the offense can sustain its success over Miami, with Buffalo entering the most difficult portion of its schedule.

"I definitely don't think it's a one-time thing how we played. We have a good sense of who we are as a team," said Allen, who earned AFC offensive player of the week honors. "I really think we found our identity as an offense."

He did concede, "We have to go out and take it. The rest of the schedule, nothing is going to be handed to us."

Buffalo's seven wins have come against teams entering this week with a combined record of 15-55. The next five opponents are 31-19, and include three division leaders: Dallas (6-4), Baltimore (8-2) and New England (9-1).

Miller has just four sacks, one shy of his career low set in 2015, when he missed six games on suspension and one on injured reserve. In his other eight seasons, he's averaged 13 sacks. One reason is teams are focusing even more on stopping him with fellow pass rusher Bradley Chubb (knee) on IR.

The Broncos are getting pressure from other players. Shelby Harris had a career-best three sacks last week, and Derek Wolfe's five sacks are one shy of his career high set in his rookie year, 2002.

QB Brandon Allen is Denver’s sixth starting quarterback since Peyton Manning retired, and he's handling the pressure of the job just fine. His college career was also spent in a football-crazed town: Fayetteville, Arkansas. That's where, as Allen explained it, "a couple of rogue fans, I guess" torched his truck in 2014 because the Razorbacks were losing. A tuba player's car also was burned.

"A tuba player? Must have been playing the tuba really badly," Allen said.

Bills offensive coordinator Brian Daboll doesn't believe his move from the sideline to call plays from the coaches' booth played a major factor in the win over Miami. Daboll instead credited his players for executing the game plan, which included a hurry-up wrinkle.

"I probably have a broader vision of it, but at the end of the day it’s about the players," Daboll said. "I’m happy for those guys."

With Emmanuel Sanders' trade and Tim Patrick's return from a broken hand, the Broncos feature one of the NFL’s tallest receiving trios. Both Patrick and Courtland Sutton are 6-foot-4, as is rookie tight end Noah Fant.

Patrick had 77 receiving yards in his return to action last week, while Sutton had 113 yards receiving, 38 yards passing and 10 yards rushing. Fant added 60 yards receiving, giving him 360 on the season, tops in the NFL among rookie tight ends.

Buffalo has allowed just two touchdowns passing in its past three, and seven overall.