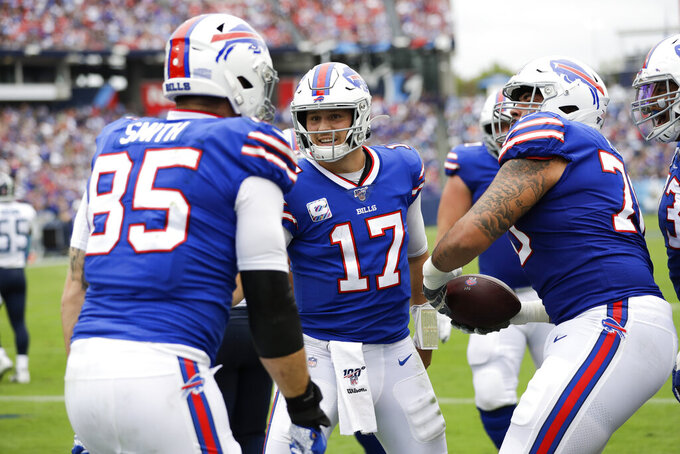 Buffalo Bills quarterback Josh Allen (17) celebrates with tight end Lee Smith (85) after they teamed up for an 8-yard touchdown pass against the Tennessee Titans in the first half of an NFL football game Sunday, Oct. 6, 2019, in Nashville, Tenn. (AP Photo/James Kenney)

ORCHARD PARK, N.Y. (AP) — Questions whether the Buffalo Bills should be taken seriously despite their 4-1 start don't faze Sean McDermott.

They might even help reinforce the coach's stay-the-course message with Buffalo entering its bye week off.

"Our focus is really on what happens inside these walls," McDermott said in his usually even-keeled way Monday, a day following a 14-7 win at Tennessee. "We're 4-1 and a whisker away from being 5-0. The fact is, we're 4-1 with a lot of room for growth."

Though doubts regarding the Bills have been raised as a result of a favorable schedule (four of their first five opponents currently own losing records), they at least deserve credit for taking advantage.

The Bills have matched their best start to a season since 2011 as a result of a stifling defense that's yet to allow more than 17 points, and a still-developing Josh Allen-led offense which is capable of overcoming its turnover-prone ways. The combination was evident against Tennessee, when Allen's interception on a forced throw over the middle led directly to the Titans tying the game halfway through the third quarter.

As happened in Buffalo's three previous victories, Allen shrugged off his sloppiness by rallying the team to victory. He capped a six-play, 77-yard drive with a 7-yard touchdown pass to receiver Duke Williams, who was promoted off the practice squad only a day earlier.

It marked the second-year quarterback's third winning drive this season, and sixth of his career. And it came a week after Allen was unable to finish a 16-10 loss to New England after being sidelined by a head injury in a game he threw three interceptions.

Much of the credit rests with a defense which returned 10 starters from a unit that allowed the fewest yards in the NFL a year ago. The 68 points Buffalo has allowed are the fewest through five games since allowing 67 in 1993. And the Bills' six-game streak of not giving up 18 or more points is their longest since a six-game stretch spanning the 2002-03 seasons.

"We're not here to make statements," he said Sunday. "We didn't play our best football. We gave up seven points, and I felt like we played a bad game."

A Jordan Phillips-led pass rush which sacked Marcus Mariota five times for 33 yards. Phillips had a career-best three sacks — all in the first half — to up his five-year career total to 9 1/2. After terrorizing Titans left tackle Taylor Lewan on the field, Phillips continued with a verbal attack afterward.

"I was really happy Lewan came back today," Phillips said, noting it was Lewan's first game after serving a four-game suspension for violating the NFL's policy against performance enhancers.

Phillips then came to the defense of teammate Shaq Lawson on social media Monday after Lewan questioned the 2016 first-round draft pick's performance.

Three of Allen's seven interceptions came in the third quarter, and Buffalo has also surrendered a safety.

Williams went from the practice squad to the end zone and finished with four catches for 29 yards in the 26-year-old's NFL debut. He was signed by Buffalo in January after leading the Canadian Football League with 1,579 yards receiving last year with Edmonton.

Williams' ascension led to Zay Jones playing one snap against the Titans before being traded to the Oakland Raiders, a person familiar with the move told The Associated Press on Monday night. The 2017 second-round pick, who led Buffalo with 56 catches, 652 yards and seven touchdowns receiving last year, was also blamed for not fighting for the ball on one of Allen's interceptions against New England.

6 — Number of field goals opponents missed or had blocked against the Bills this season after Titans placekicker Cairo Santos went 0 of 4. Also add in two missed extra-point attempts.

Buffalo returns from its bye to play three straight home games, starting with the currently winless Dolphins (0-4) on Oct. 20. The Bills' next six opponents — including Washington (0-5) and Miami twice — currently have a combined a record of 6-21.