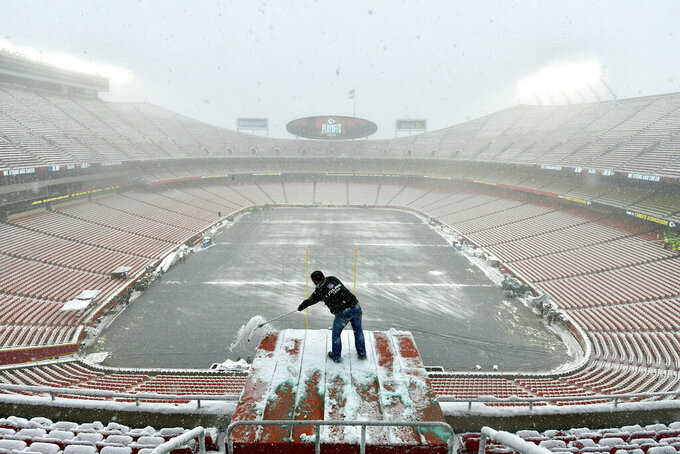 FILE - In this Jan. 12, 2019, file photo, Kyle Haraugh, of NFL Films, clears snow from a camera location at Arrowhead Stadium before an NFL divisional football playoff game between the Kansas City Chiefs and the Indianapolis Colts, in Kansas City, Mo. The Chiefs began to lay new sod inside Arrowhead Stadium on Wednesday, Jan. 16, after much of the field was torn up in the divisional round. Heavy snow that began last Friday and stopped just before kickoff left parts of the field mushy, particularly between the hash marks and along the sidelines. Those areas and the south end zone were getting fresh sod. (AP Photo/Ed Zurga, File)

KANSAS CITY, Mo. (AP) — Chiefs safety Eric Berry and running back Spencer Ware returned to practice Wednesday, raising the possibility that both will be available for their AFC championship showdown with New England.

Berry missed most of the season with a heel injury that developed in training camp, then played parts of two games against the Chargers and Seahawks. The heel began to bother him again the next week, and he did not practice last week or play in the divisional round against Indianapolis.

Ware hurt his hamstring in a Week 14 win over the Ravens.

Chiefs coach Andy Reid also said that right guard Laurent Duvernay-Tardif, who was activated off injured reserve on Tuesday, would work into the mix with the starters. Whether he starts in Sunday's game against the Patriots will not be decided until later in the week.

"We're getting our work done starting today," Reid said, "and we'll put it in right through Saturday."

The Chiefs have treated Berry with caution all year after the three-time All-Pro tore his Achilles tendon in last season's opener. He remains one of their best playmakers when he's on the field, and he's continued to provide a vocal and emotional lift while he's been out.

He broke down the pregame huddle before last Saturday's 31-13 victory over the Colts.

One sign that Berry might be available came when Duvernay-Tardif came off IR. The Chiefs had to cut someone from the 53-man roster to make space and chose veteran safety Ron Parker.

"We've had great communication with him, so we're going to keep that and just see how he feels as we go," Reid said. "Right now he feels pretty good and we'll see how he feels at practice, and during practice. We talk to him all the time. Same with Larry and all the guys."

The only player who didn't practice Wednesday was linebacker Dorian O'Daniel, who remains out with a calf injury. O'Daniel plays on four different special teams units.

In other news, the Chiefs began to lay new sod inside Arrowhead Stadium on Wednesday after much of the field was torn up in the divisional round. Heavy snow that began last Friday and stopped just before kickoff left parts of the field mushy, particularly between the hash marks and along the sidelines.

Those areas and the south end zone were getting fresh sod.

Patriots coach Bill Belichick, whose team is accustomed to playing on turf, acknowledged this week that the playing surface can be important. He also said that the Patriots generally try to replicate it during practice, but that's sometimes difficult to accomplish.

"I'd say during the year we've practiced in most every condition we could get," he said, "and it would be pretty unusual for something to come up that we haven't at least approximated in the practice setting so that we can refer back to, 'Well, when it's like this or when this happens, we need to make this adjustment,' because we've already talked about it and made it.

"So, it would have to be something pretty extraordinary to fall outside of that, out of those experiences that we've had over the course of the year. But if it did, we would just broaden our net."

Another factor to consider is the weather: The forecast calls for more rain and snow on Saturday, followed by an arctic blast Sunday that could yield game-time temperatures in the single digits.

"It don't matter to me on game day," Chiefs linebacker Justin Houston said. "I just hate TV timeouts and standing there. Besides that, it doesn't matter what the temperature is when we're playing."