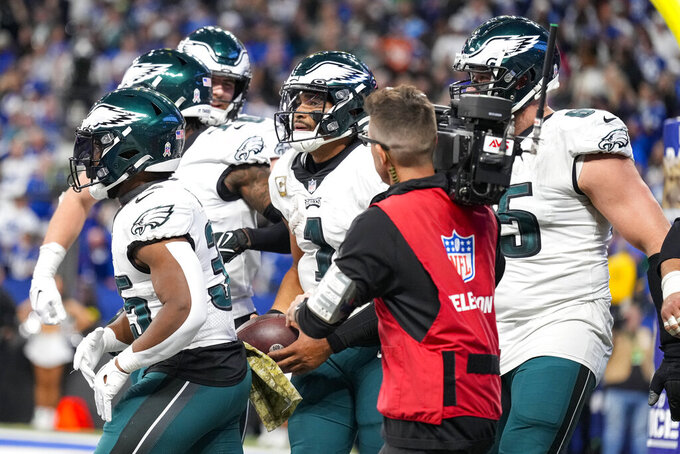 Philadelphia Eagles quarterback Jalen Hurts (1) celebrates after a touchdown against the Indianapolis Colts in the second half of an NFL football game in Indianapolis, Fla., Sunday, Nov. 20, 2022. (AP Photo/AJ Mast)

PHILADELPHIA (AP) — Nick Sirianni whipped off his visor, stood on a bench and shouted in pumped-up excitement toward a small group of Eagles fans that had come to root for their team in yet another victory.

The Eagles coach was just getting started in letting his emotions spill as he left the sideline. Sirianni was red-faced as he walked to the locker room and wiped away tears after a short embrace with general manager Howie Roseman. Then, following a 17-16 win Sunday over the Indianapolis Colts, Sirianni didn’t give away the game ball to the star of the game. For this win, Jalen Hurts, who rushed for the winning TD late in the fourth, tossed one to his coach.

“I know as he walked off the field he got a little bit emotional,” Hurts said. “I guess I didn’t help when I tossed him the ball. Coach doesn’t get enough credit for what he’s done and what he’s been for us.”

What he's done is help put the Eagles on a historically promising path.

The win over Indy came with flair, as the Eagles trailed 13-3 headed into the fourth quarter and rallied to win. The Eagles won after trailing by 10-plus points in the fourth for the first time since Dec. 20, 2010 against the New York Giants.

Sirianni was fired up for another win, yes, but also because he got to stick it to the Colts after they fired his mentor, coach Frank Reich. Reich was the one who hired Sirianni in 2018 for the start of a three-year stint as the Colts offensive coordinator.

“You don’t want to know what I think if he should be here or not,” Sirianni said. “You guys can probably imagine what I really think. I love him and so I got a little bit emotional about that and it was good to see the guys that I really cared about."

The Eagles were sloppy in spurts and finished with seven penalties (including five on offense) for 55 yards. They also had two turnovers.

WR Quez Watkins. Watkins’ diving 50-yard reception against Washington turned into a disaster when he fumbled the ball on the run and spoiled a terrific shot at keeping the undefeated season alive. Eagles coaches and Hurts kept faith in the speedy wideout, and this time he delivered in the clutch. Hurts hit Watkins for a 22-yard TD with 13:31 left in the game.

Yes, a slew of talented receivers means not everyone will always get the ball, but star wideout A.J. Brown had only five catches for 60 yards and has only 10 catches for 126 yards and one touchdown in the last three games. That followed 156 yards receiving and three touchdowns in a late October win against Pittsburgh.

The Eagles may not get back second-year defensive tackle Marlon Tuipulotu (knee) this season, but they remain hopeful tight end Dallas Goedert (shoulder) will return in time for the playoffs.

169. Center Jason Kelce played his 169th career game, which tied him for most by an offensive lineman (Chuck Bednarik, 1949-62) in team history. He’s tied for sixth overall in games played. Kelce also made his 132nd consecutive regular-season start, which is the longest active streak among NFL centers.

The Eagles can pad their record with consecutive home games starting Sunday night against Green Bay and the following week against Tennessee.