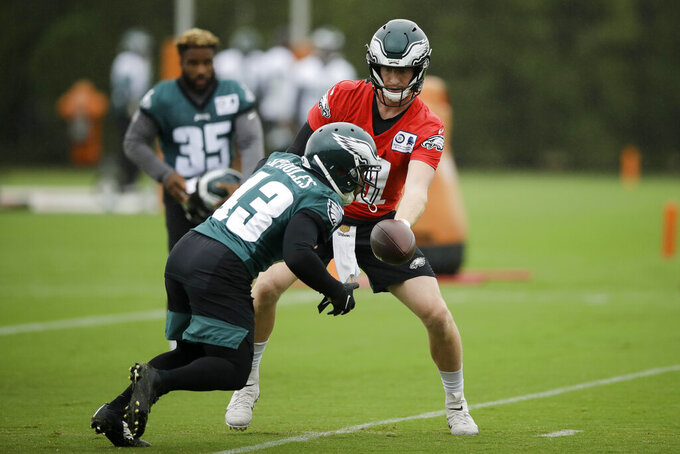 PHILADELPHIA (AP) — A balanced offense is usually a formula for success in the NFL.

The Philadelphia Eagles found it last week and want to continue emphasizing the run. They had had 176 yards rushing in a 34-27 comeback win over the Green Bay Packers at Lambeau Field last week.

It was only the fourth time under coach Doug Pederson the Eagles had more yards on the ground than in the air. They've won the last three games they've done it.

"In order to be a successful offense, we have to establish the run," tight end Zach Ertz said. "Hopefully that carries over because it makes everyone's lives in the pass game easier. It makes the play-action a viable threat if the run is successful. It's a big point of emphasis for us each week."

Jordan Howard ran for 87 yards and two touchdowns against the Packers and rookie Miles Sanders rushed for 72 yards. They'll look for more when the Eagles (2-2) host the New York Jets (0-3) on Sunday.

"I'm just trying to make plays anytime my number is called," Howard said. "We needed to get in sync because in the preseason we didn't really play together. Now that we got the run game going, the offense will be hard to stop."

Carson Wentz only threw for 160 yards in Green Bay but he tossed three TD passes and wasn't sacked. The offensive line had its best game, opening big holes and protecting well.

The Eagles like to use two tight ends with Dallas Goedert joining Ertz. Both are excellent receivers and Goedert is an outstanding run blocker, so having both guys on the field makes the offense even more versatile. Goedert caught a TD pass last week and Ertz led the team in receptions.

"We've talked about how strong Dallas is at the point of attack," offensive coordinator Mike Groh said. "He's tenacious and strong. He has strong hands when he can get his hands on you. He plays with a balance and a base and he can really move people. He obviously gives us an advantage there as an in-line tight end."

"We try and be balanced every week and we happened to run the ball effectively against Green Bay," Kelce said. "Hopefully we can do that every week. You just try to take advantage of what's available."

The importance of the run game is magnified for Philadelphia because the offense is missing speedy wide receiver DeSean Jackson. He's out with an abdomen injury. Alshon Jeffery returned last week after missing almost two full games with a calf injury.

"The sky's the limit for our offense," Jeffery said. "Once we get everybody back out there, we're gonna be scary."