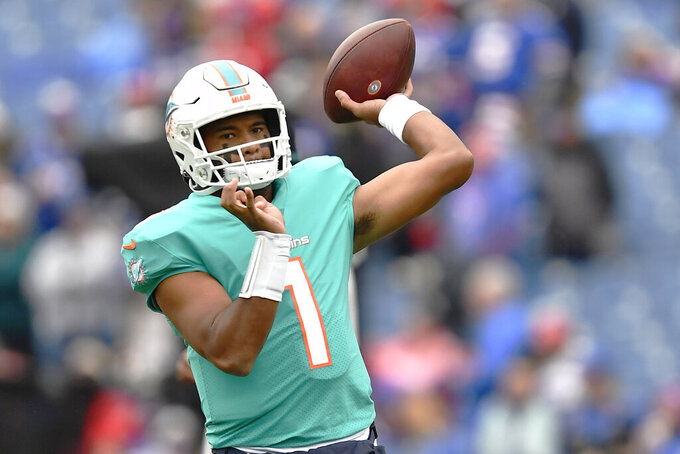 Miami's Tua Tagovailoa has earned a spot in this elite tier. In two games with DeVante Parker healthy during Tua’s starts, Tagovailoa has posted above-expectation-level efficiency yet has averaged just 203.5 passing yards and 0.5 passing touchdowns. In that small sample, he has faced the NFL’s top-ranked adjusted pass defense (the Buffalo Bills) and a top-20 unit (the New York Giants). This week, he gets the Houston Texans’ 27th-ranked adjusted pass defense.

Joe Burrow could have a tough time as the Cincinnati Bengals draw the Cleveland Browns, who rank fourth in pass rush, via PFF. He’s yet to face a top-10 team in pressure rate and has just two matchups against top-20 units, via NextGenStats’ pressure rate data. But it’s not enough to bench Burrow unless you have tantalizing options ahead of him, as he averaged 348.5 yards and 2.5 passing touchdowns in those high-pressure matchups.

Carson Wentz draws the New York Jets, who rank 25th against the pass here at numberFire, and in three games against adjusted pass defenses outside the top 20, Wentz has averaged 284.3 yards and 2.0 passing touchdowns with a Passing Net Expected Points (NEP) per drop-back rate of 0.45. The NFL average this season is 0.13.

Derek Carr has been great this season, and his 324.1 passing yards and 1.7 passing touchdowns increases to 381.3 yards and 2.0 touchdowns against bottom-half pass defenses, which the Giants are (20th).

(asterisk)Christian McCaffrey is currently projected at half of his workload. If he starts, you’re starting him.

Eli Mitchell has solidified himself as a strong running back play each week. He has played 66.4% of snaps and ran a route on 47.4% of the San Francisco 49ers’ drop-backs (per NextGenStats) over the past two games while posting per-game averages of 18.0 carries and 3.0 red zone carries. Though he hasn’t seen a target, the route rate is promising. The Arizona Cardinals rank 24th in rushing success rate allowed to running backs.

Zack Moss saw a pretty sizable shift in his passing role last week. Moss ran a route on 51.2% of the Buffalo Bills’ drop-backs last week while seeing a heavy target load (seven) in addition to a modest rushing workload (eight carries and three red zone carries). He’s a strong RB2 play in an offense expected to put up plenty of points.

Our model at numberFire likes Adrian Peterson to contribute right away this week against the Los Angeles Rams, a team that is actually just 20th in Rushing NEP per carry allowed to backs so far this season. Jeremy McNichols is just at the top of the “Bench if possible” tier.

Boston Scott was the primary back for the Philadelphia Eagles in Week 8 without Miles Sanders. He played on 43.5% of the snaps and ran nine routes (actually a 56.3% rate in a run-heavy romp). The Los Angeles Chargers invite the run and are 32nd in both Rushing NEP per carry and Rushing Success Rate allowed to opposing running backs.

In games with both Tua Tagovailoa and DeVante Parker healthy, Parker has a 28.1% target share, tied with Jaylen Waddle for the team lead. Waddle finds himself in the tier above Parker, which makes sense. He has a better weighted workload (11.7 weighted targets, stemming from 2.0 downfield and 2.0 red zone targets in this two-game sample). Parker is at 10.1 weighted targets (1.5 downfield targets per game with no red zone work here). The Texans are 24th in player-adjusted fantasy points per target allowed to opposing wide receivers.

Michael Pittman Jr.‘s workload is pretty phenomenal. Since Week 2, he has accounted for 26.8% of the Colts’ targets and 37.0% of their air yards with high leverage on his looks: 2.9 downfield targets, 1.3 red zone targets, and 0.7 end zone targets per game. In this sample, he’s 12th among all active players in target market share.

We can easily get discouraged by the showings from Courtland Sutton and Jerry Jeudy from Week 8, when the Denver Broncos shared the ball with everyone, but the algorithm likes them to provide fantasy value in a fantasy-friendly game against the Dallas Cowboys, who rank just 22nd in adjusted fantasy points per target allowed to receivers.

Start with confidence: These guys are the big six for the week.

Consider in needed: You’ll likely be starting these options if you don’t have a top-tier tight end.

Over the past three weeks, Cole Kmet ranks sixth in target market share (20.5%) at the position, though the low-volume nature of the Chicago Bears’ offense has resulted in just 5.7 targets per game. He has a good red zone role (36.4%), but a terribly low average depth of target (5.6). You could do worse than Kmet in a pinch, and the target share helps separate him from the tier below.