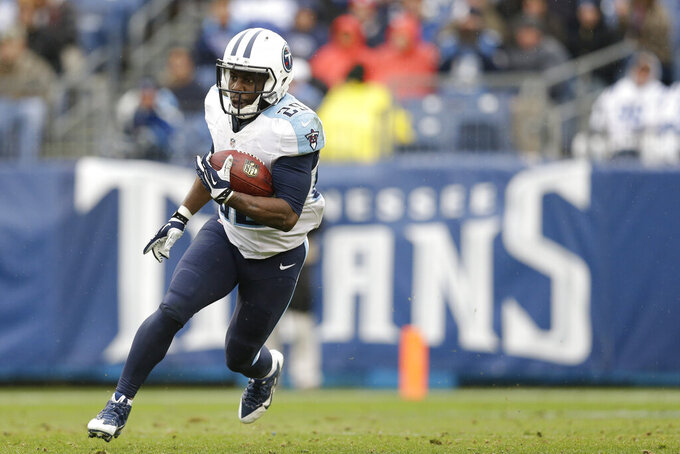 FILE - Tennessee Titans running back Leon Washington carries the ball during the second half of an NFL football game against the Indianapolis Colts on Dec. 28, 2014, in Nashville, Tenn. Washington was a dynamic running back in the NFL and an All-Pro kick. His competitive nature has taken him from the playing fields to the sidelines as a coach. Washington is an assistant with the New York Jets and works with special teams and running backs. (AP Photo/Sanford Myers, File)

FLORHAM PARK, N.J. (AP) — Leon Washington loved being on the sideline as a head coach, leading his football squad on game days and pushing them hard all week during practice.

Well, maybe a little too much.

Especially since it was only middle school.

“It was a great experience and it taught me so much because it was like, man, you know what, Leon? These players don’t see it like you see it,” the New York Jets assistant coach and former running back and All-Pro kick returner said with a smile. "Man, you can't expect an 11-, 12- or 13-year-old to go out there and execute like we do in the NFL.

“So that taught me a lot of patience.”

Washington was the coach of his oldest son Leon Jr.'s team at Cuthbertson Middle School in Waxhaw, North Carolina, in 2017. And things were going OK, he thought, until he was called into the principal's office.

“It was like, ‘Hey, Leon, what are you doing? All our kids are banged up,'” Washington recalled, shaking his head.

“Yeah, we didn't do too well,” Washington said with a laugh. “But we did beat the team that eventually ended up winning it all.”

That competitiveness made him a star player — and has carried over to his budding coaching career.

“I don’t really want to make predictions on how it will go because I just want to work my tail off, become a better teacher, become a better coach," he said. “I’m just going to learn as much as I can and see where it takes me.”

That has always been the approach of the 40-year-old Washington, who was a fan favorite during NFL stops with the Jets, Seahawks, Patriots and Titans in a nine-year playing career after being a fourth-round pick out of Florida State. His eight career kickoffs returned for touchdowns tie him with Josh Cribbs and Cordarrelle Patterson for the league record.

His coaching path began in 2016, two years after his last NFL game. Washington reached out to Gus Bradley, then Jacksonville’s head coach whom he knew from their days together in Seattle, to intern that summer as part of the Bill Walsh NFL Diversity Coaching Fellowship. Bradley convinced Washington to stay the entire season.

“It really gave me the opportunity to see if I really had the itch, if I really wanted to be a coach," Washington said. “I definitely wanted it.”

And he thinks the NFL is doing a better job of increasing coaching opportunities for minorities than when he was playing.

According to the Institute for Diversity and Ethics in Sport at the University of Central Florida, the percentage of NFL assistants of color — a race other than white — increased from 35.6% in 2020 to a high of 40.9% last year in league in which 71% of players are men of color.

“It would be definitely beneficial to have more minority coaches to fit in roles because in so many ways that can help relate to the players just a little bit better," Washington said. "That relatability is something you can't fabricate.”

After not finding an NFL opportunity in 2017, Washington took that gig on the middle-school fields of North Carolina. In 2018, he joined the staff of then-Atlanta coach Dan Quinn — whom he also knew from his playing days in Seattle — again through the Bill Walsh NFL Diversity Coaching Fellowship.

He was reunited with former Seahawks assistant Darrell Bevell that summer. Washington followed the offensive coordinator in 2019 to Detroit, where he spent two years as a full-time assistant working with special teams and running backs through the William Clay Ford Minority Coaching Assistantship.

Shortly after Robert Saleh — whom Washington knew from when Saleh was Seattle's linebackers coach — took over as coach of the Jets in 2021, he sent Washington a video message. Washington pressed play and watched Saleh sing the “I'm coming home” verse from Diddy - Dirty Money's 2010 hit “Coming Home."

“I was like, ‘Man, this guy here, he’s like the Nick Saban of recruiting right now,'" a laughing Washington said. "That was awesome. A match made in heaven.”

In his second season as a Jets coach, Washington has worked closely as an assistant for special teams coordinator Brant Boyer while also helping running backs coach Taylor Embree.

“Leon communicates really well,” Boyer said, "and he gets them to work.”

“I respect him as a coach, but when he's talking, he's talking from a player's perspective,” Berrios said. “It's so easily translated because he's been in our shoes, he knows the language. ... He's one of the best of all-time.

"So I look at him and it's almost like ‘Field of Dreams’ — like he's still playing next to me because it never leaves you when you're that good at something.”

Washington hopes to leave that same impression as a coach.

And someday, improve that head coaching record — perhaps in the NFL.

“My heart is in this, and especially this organization," Washington said. "The only selfish thing I can say I want out of this is a Super Bowl championship and just continue to grow as a coach.”