NFL 2019: Chiefs aim for Super Bowl with Mahomes at QB 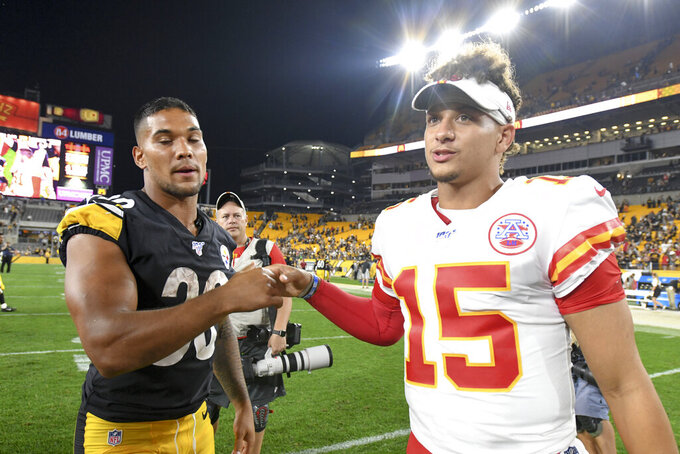 KANSAS CITY, Mo. (AP) — The Kansas City Chiefs came within a defensive stop in overtime of beating the New England Patriots in the AFC title game, the closest they've come to reaching the Super Bowl in nearly five decades.

Not surprisingly, expectations among fans are to take that next step.

They are among the Chiefs, too.

"Last year was a good moment for us," linebacker Reggie Ragland said, "but we strive to get to win the AFC championship this year and go to the Super Bowl, so we have to keep working — keep getting better, keep being physical, keep being tough mentally. So far, we're doing a good job of it."

There are plenty of reasons to believe the Chiefs can finally wipe away all those years of mind-numbing disappointment, and return to the Super Bowl for the first time since Len Dawson was under center.

Start with the guy who plays Dawson's position.

Patrick Mahomes is coming off a record-setting debut as the starter, throwing for more than 5,000 yards with 50 touchdown passes and a mere 12 interceptions. But beyond the numbers, the young quarterback out of Texas Tech proved he could be a leader from the get-go, taking center stage in a locker room full of more experienced players and leading vocally and by example.

It helps when you're voted All-Pro and the league's MVP.

"We got a lot of experience last year. We played in a lot of big games. We won some, we lost some," Mahomes said. "What you learn from those games, you see what you have to do to be a great football team. For us this year, it's all about just taking that next step. It's all about going out every single day and doing whatever it takes to find a way to win the game on Sunday."

Mahomes has just about everyone in his supporting cast back this season, losing only wide receiver Chris Conley and getting second-round pick Mecole Hardman as a replacement.

In other words, Mahomes could very well surpass the eye-popping numbers he put up last season.

The question now is whether the other side of the ball can raise its level of performance.

After the Chiefs' defense melted down in overtime against the Patriots, it took little time for coach Andy Reid to fire defensive coordinator Bob Sutton. Longtime stalwarts such as Justin Houston and Eric Berry were let go, and Steve Spagnuolo was brought in to overhaul the entire system.

The Chiefs now run a 4-3 set. They've added high-profile players such as Frank Clark and Tyrann Mathieu. And at least in their early preseason games, the returns have been promising.

"This is what I always preach to them: We are going to chase perfection but rely on relentlessness," Spagnuolo said. "That's been a motto and a theme for us. I'm hoping we're adopting that as players."

As the Chiefs prepare for their opener Sept. 8 in Jacksonville, here are some other story lines:

Hardman ran one of the fastest 40-yard dash times at the NFL scouting combine. When he is on the field with fellow wide receivers Tyreek Hill and Sammy Watkins, it gives the Chiefs a trio of threats capable of running sub-4.4 second times in the 40.

"You name it, we got 4.2, 4.3, maybe 4.1. I don't know what Tyreek runs now, who knows?" said tight end Travis Kelce, another favorite Mahomes target. "We got guys who can absolutely fly all over the field, and speed kills in this game. If you got it, you're in the advantage."

The Chiefs' star wide receiver was suspended all offseason while the NFL investigated a domestic violence case. Hill ultimately was cleared by both the district attorney and the league, reported for the first day of training camp and has been making plays throughout the preseason.

The Chiefs acquired Clark from Seattle and gave him a five-year, $104 million deal. They nabbed Mathieu in free agency, along with pass rusher Alex Okafor and cornerback Bashaud Breeland. Then they got another big name midway through training camp when cornerback Morris Claiborne inked a one-year deal.

Special teams coach Dave Toub has received some interest in head coaching jobs the past couple of offseasons, but he's still running the show in Kansas City. Veteran punter Dustin Colquitt is back along with strong-legged kicker Harrison Butker, and the Chiefs' flotilla of speedy wide receivers and defensive backs gives them plenty of options in the return game.

The Chiefs play three of their first four games on the road, then face a four-game stretch against playoff contenders Green Bay, Minnesota, Tennessee and the Los Angeles Chargers. The division race could be decided in December, when the Chiefs visit New England and Chicago and play Denver at home before a regular-season finale against the Chargers at Arrowhead Stadium.