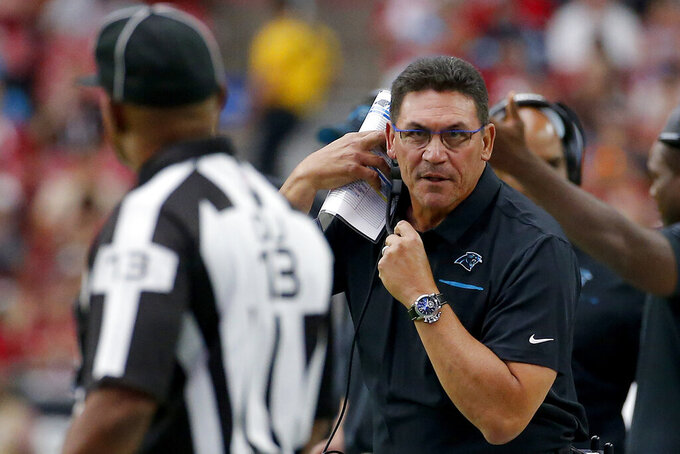 The fact that neither team has a winning record doesn't diminish one bit the intensity of the rivalry between the Ravens and Steelers.

If it is not the most historic series in NFL history, it's as intense as any. Just listen to what John Harbaugh told his players this week, heading into their visit to Pittsburgh.

To remain on top of the AFC North, that's exactly what Baltimore (2-2) must do. Cleveland is tied with the Ravens, and the Steelers are 1-3, but come off a convincing intra-division victory against Cincinnati.

"No matter who is playing," Ravens left tackle Ronnie Stanley said, "this rivalry is going to be one of the biggest rivalries in all of sports."

While Ravens-Steelers meetings often are decided in the trenches, Pittsburgh's coaches and players know that stopping fast, versatile and elusive Lamar Jackson is critical to having a chance against Baltimore.

"You can't really replicate (Jackson in practice), but you can get as close as possible," Steelers defensive back Mike Hilton said. "Having a guy that moves around and is able to keep plays going is going to be big for us. We know we have to have good rush lanes and keep him in the pocket."

Week 5 began Thursday night with the Seattle Seahawks' 30-29 home victory over the Los Angeles Rams. Russell Wilson threw a 5-yard touchdown pass to Chris Carson on fourth-and-goal with 2:28 remaining to give Seattle the lead, and the Rams' Greg Zuerlein missed a 44-yard field goal with 11 seconds left. Wilson was 17 of 23 for 268 and four touchdowns for Seattle (4-1). The Rams dropped to 3-2.

Even with both teams losing last week — the Packers' defense showed little, and the Cowboys' offense showed even less — this is a juicy matchup. It almost always seems to be.

The Packers have won seven of the past eight in this series, with Dallas' victory coming during a franchise-record 11-game winning streak when QB Dak Prescott and RB Ezekiel Elliott were rookies in 2016. And the Packers are 3-0 at AT&T Stadium, including a Super Bowl victory against Pittsburgh.

Prescott has been perfect in the third quarter this year, completing all 28 passes. He needs one rushing TD to tie Roger Staubach's club record of 20 by a quarterback.

Teddy Bridgewater has won his two starts in place of Drew Brees (thumb surgery), but it's an aggressive, quick defense that has placed New Orleans atop the NFC South.

Cleveland's balanced offense led by running back Nick Chubb and receiver Jarvis Landry was huge in last week's win at Baltimore. The Browns are tied for first place in the AFC North with the Ravens, the first time since Week 10 in 2014 they were on top of the division.

This is their second meeting of 2019, with the Chiefs' win over Indianapolis in January their first home playoff victory since Jan. 8, 1994. The Chiefs seek to start 5-0 for a third consecutive season and are odds-on to get it: KC is 11-2 under coach Andy Reid in October. Reid needs one win to reach 200 regular-season victories. He has 211 total, sixth most in NFL history.

The Falcons don't prosper against the AFC. They have lost six straight and 12 of their past 13 to AFC opponents. If they don't improve their turnover margin (minus-5), they can't expect to contend.

Houston, meanwhile, is a plus-2 and has forced a turnover in 17 consecutive games, the NFL's longest active streak.

A key here will be whether Atlanta's leaky and banged-up pass defense can slow down Deshaun Jackson's connections with DeAndre Hopkins.

"They have outstanding players everywhere," Shurmur says. "When you start saying, 'OK, well, this is their best player. No, this guy is their best player.' All of the guys up front . they have two edge rushers. They have interior guys that can get push. They have linebackers that are Pro Bowlers. They have corners and they have safeties that have all been to Pro Bowls. They're well-coordinated and they put pressure on the passer, and they do a good job of stopping the run. That's what you want from a defense."

Carolina has the league's stingiest pass defense, which might not make a lot of difference if Leonard Fournette goes off again. The Jacksonville back had a career-high 225 yards rushing last week and leads the AFC in that department.

The teams that brought us the Music City Miracle in 2000 — Buffalo folks are still arguing that lateral was a forward pass — meet up in what rarely has been a good series for the Bills. They trail it 28-18, though they have won two straight vs. the Titans by one point each. The Bills can match the franchise's longest streak to start a season since 1993 with a third road win, but starting QB Josh Allen has been in the NFL's concussion protocol.

Oakland's early season trek continues with a trip across the Pond. The Raiders will find there one Khalil Mack, the edge rusher they traded to Chicago before last season. All Mack has done is lead the most rugged defense in football.

New England comes off yet another stellar defensive performance to offset an ineffective offense: Tom Brady's 45.9 passer rating against Buffalo was the sixth lowest of his career and lowest since finishing with a 34 rating in a 27-20 loss to Indianapolis on Nov. 5, 2006. The Patriots had lost the previous six times Brady finished with a passer rating of 48 or lower, but he might rate about 80 points higher in this one.

Washington is in such turmoil — an accurate term politically or athletically — that when coach Jay Gruden was asked about a plan for facing the Patriots, he said he didn't have one yet. Hopefully the team has one by Sunday.

There are reasons to watch this game. We just can't think of any at the moment.

New York has been hopeful that Sam Darnold will return less than a month after contracting mononucleosis. One must hope coach Adam Gase isn't thinking about rushing back his franchise quarterback, particularly with this season seemingly a lost cause.