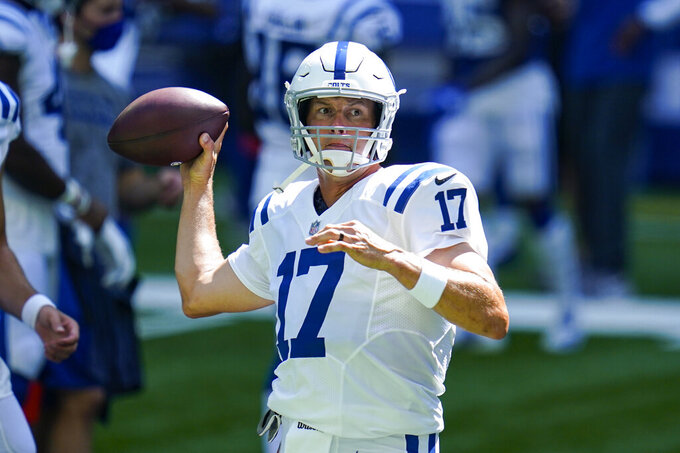 Yes, even a 17-year veteran, a father of nine and a future high school football coach still gets geeked up for the start of football.

And as much as the Colts' new starting quarterback wants to keep Sunday's season opener at Jacksonville in perspective, it's not just another game. It's the start of a new, exciting and uncertain future.

“I had that nervous energy last night, and I think there will be a little bit of that all week long,” Rivers said. “My dad would always tell me if you don’t have butterflies, something's wrong. But it's the good kind of butterflies because you care, you care about it, you love it and you want to go out and perform at a high level."

For most of Rivers' career, he's been one of the league's top players.

He's been to the playoffs six times, made eight Pro Bowl appearances and begins this season needing three touchdown passes to become the sixth player in league history with 400. He's also within striking distance of passing Hall of Famer Dan Marino for fifth on the league's career lists for completions, yards passing and TDs.

But his final season with the Los Angeles/San Diego Chargers proved to be one of Rivers' worst.

He won five games, the second fewest of his career, and threw 20 interceptions, matching the second-highest total of his career. His 23 touchdown passes were the fewest he had in more than a decade, and his completion percentage dipped to 66%.

Predictably, critics questioned whether the 38-year-old QB with the unorthodox throwing motion was just losing arm strength. Or worse, whether he was finished. The Colts didn't buy it and instead gave Rivers a one-year, $25 million contract in March to prove the doubters wrong.

“I expect the same Philip Rivers that we had when we were in San Diego together," offensive coordinator Nick Sirianni said. “He’s accurate. He makes good, fast decisions. I expect that out of him in the passing game – getting us into the right protection call because this guy studies blitzes and the opposing team more than anyone I’ve ever been around.”

The Chargers spent much of last season playing from behind, forcing Rivers into 591 attempts and prompting him to take more chances late in games. Only six quarterbacks threw the ball more than Rivers in 2019; only Jameis Winston and Baker Mayfield threw more interceptions..

Rivers might not come close to those numbers in Indy given coach coach Frank Reich's preference for a run-heavy offense. The Colts finished seventh in rushing last season, their first top-10 appearance since 2001, and could lean even more heavily on the ground game this year as 1,000-yard rusher Marlon Mack and second-round draft pick Jonathan Taylor share the carries.

“Just use your experience and your intelligence to make the checks, do it with confidence, don’t feel like you have to win the game for us every week," Reich said. “We’ve got a good team, we’ve got a good roster. When shots are there be aggressive and don't think twice about it.”

With two-time All-Pro left guard Quenton Nelson, Pro Bowl center Ryan Kelly and longtime left tackle Anthony Castonzo paving the way, the Colts allowed 50 sacks over the past two seasons. Last year, it was the NFL's only five-man unit to start the same players in all 16 games — a streak they hope extend beyond Sunday.

Rivers, meanwhile, was sacked at least 30 times nine of the last 10 seasons.

Cutting those numbers would make Rivers a lot more comfortable around his new teammates, the new locker room and his new Indianapolis home as the excitement builds.

“I''m fired up," he said. “It’s game week. It's real. We're about to kick off the first week. We didn’t even have a preseason games to play, a series with no consequence. We’ve got a heck of a group and I feel personally I can still play at a high level."