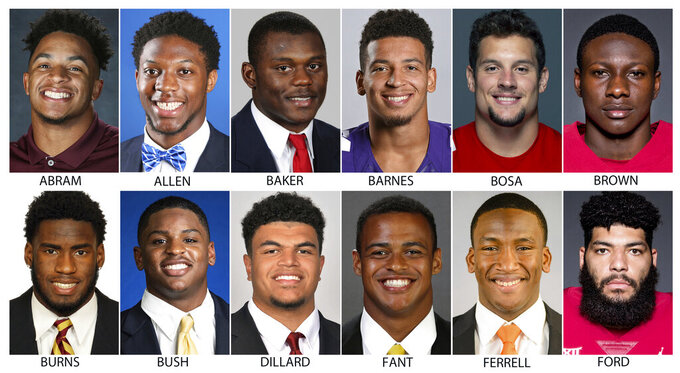 The Pittsburgh Steelers hope the drama the star wide receiver produced during his prolific, but occasionally problematic stay followed him out the door.

And while general manager Kevin Colbert understands it will be difficult to replace such a vital part of one of the NFL's most prolific offenses, he's been around long enough to know that at some point everyone leaves. Finding the next wave is what he's paid to do.

"It's our job to try to make it work and patch it back together so we're not a non-playoff team (again)," Colbert said.

Something the Steelers became during a late-season swoon last fall that culminated in a 9-6-1 finish and set the stage for Brown pouting his way into a trade with Oakland .

While Pittsburgh's haul for the only player in NFL history with six straight 100-catch seasons — a third-round and a fifth-round selection — was modest, it did give the Steelers some flexibility when the draft begins on Thursday.

Pittsburgh has 10 picks overall, including three in the top 66 and four in the top 83. It's the kind of depth that could allow the Steelers to trade up in the first round if they want or let them stockpile talent in an effort to address the problems that cropped up during a 2-4 finish, particularly an inability to take the ball away when it mattered. Pittsburgh produced just 15 turnovers in 2018, tied for third-fewest in the league.

It's a number that has to climb if the Steelers want to keep pace in a new-look AFC North in which the Cleveland Browns — yes, the Browns — seem to have all the momentum.

Both Colbert and coach Mike Tomlin stressed the need for more "ballhawks" heading into 2019. Pittsburgh took a step in that direction by signing cornerback Steven Nelson — whose four interceptions in 2018 were just one less than the combined total by the Steelers' entire secondary — in free agency.

Still, more talent is needed, leading to the likelihood Pittsburgh will take a defensive player in the first round for a seventh straight year. The Steelers should have some solid options if they stick at the 20th pick.

While LSU's Greedy Williams figures to be off the board by the time Pittsburgh is on the clock, Washington's Byron Murphy and Georgia's DeAndre Baker — who captured the Jim Thorpe Award last season as the top cornerback in college football — will likely be available.

Of course, taking a cornerback for the second time in four years would be a sign that the Steelers swung and missed on Artie Burns, whom they selected 25th overall in 2016. Burns put together a solid rookie season but has tailed off significantly. He ended 2018 being used almost exclusively on special teams and Pittsburgh declined to pick up his fifth-year option.

Burns' struggle to stick is symbolic of Colbert's uneven track record when it comes to using high picks on defense.

For every T.J. Watt — who has 20 sacks in two seasons and looks every bit like the next man in line to continue Pittsburgh's tradition of game-changing outside linebackers — there is a Burns, a Jarvis Jones or a Bud Dupree. Jones, the first-round pick in 2013, lasted just four years. Burns needs a quick turnaround to avoid "bust" status and Dupree has yet to post more than six sacks in a season.

Yet the Steelers can afford to keep focusing on defense early in the draft because of their ability to find plug-and-play types in the later rounds on offense. Brown, after all, was a sixth-round pick in 2010.

James Conner, a third-rounder in 2017, and Jaylen Samuels, a fifth-rounder in 2018, were so productive in the backfield last season the Steelers hardly missed Le'Veon Bell.

Pittsburgh added wide receiver Donte Moncrief as a free agent to play with JuJu Smith-Schuster and James Washington. The Steelers could use another target for quarterback Ben Roethlisberger, but figure to wait until they find a cornerback and a linebacker first.

Colbert said the Steelers have yet to find a capable replacement for Ryan Shazier. The linebacker will sit out a second straight season while recovering from spinal surgery in December 2017. Jon Bostic, signed as a free agent last spring, was only so-so alongside veteran Vince Williams.

The Steelers signed longtime Rams starter Mark Barron in March , but Barron — who moved from safety to linebacker in 2015 — turns 30 in October. If the Steelers do opt to be aggressive and move up, it would almost certainly be an attempt to get an inside linebacker such as Michigan's Devin Bush.

So many picks could give the Steelers some wiggle room late. Kicker Chris Boswell kept his job despite a disastrous 2018. Punter Jordan Berry's numbers were ordinary at best last fall. Using one of their final picks to provide Boswell or Berry with competition in camp is a possibility.