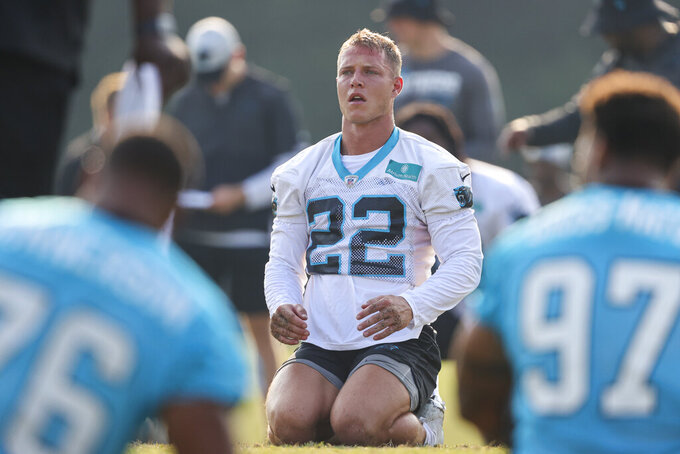 The former doormats of the division are now envied by every other NFL team.

“I’ve been waiting for this for seven years now,” said Evans, a first-round pick in 2014. “That’s what we want. When we went to Pittsburgh my rookie year, we wanted to be the Pittsburgh Steelers. Now everybody wants to be the Tampa Bay Buccaneers. That’s what you want, and we look forward to the challenge.”

Tom Brady and the Buccaneers aren’t the defending division champions. New Orleans won its fourth consecutive division title at 12-4, one game ahead of Tampa Bay, which made the playoffs as a wild card.

The retirement of Saints quarterback Drew Brees only makes Tampa Bay a stronger favorite in the division.

“I know Drew Brees is retired, but they’ve won a lot of football games and sustained success, so we’ve got all the respect in the world for New Orleans,” Smith said.

Tampa Bay coach Bruce Arians has reminded his players they can’t lean on last year’s run of eight consecutive wins to the championship. Arians relayed a simple message on the first day of training camp in July.

Brady, 44 and who had offseason knee surgery, is doing his part to make sure complacency isn’t an issue. Even though the Bucs return all 22 starters, Brady reiterated the difficulty of the challenge ahead.

It's difficult to repeat as Super Bowl champions, but Brady knows the path. No team has repeated since Brady led the 2003 and 2004 New England Patriots to consecutive titles.

“We have to be able to create our own future, and that’s really about attitude, effort, and preparation,” Brady said. “Nothing about last year is going to carry over into this year. ... It’s an entirely new challenge.”

Brees’ retirement and Carolina’s acquisition of Sam Darnold from the Jets created quarterback turnover in half of the division’s teams. Brady returns for his second season in Tampa Bay while Matt Ryan, 36, enters his 14th season in Atlanta.

With Brees launching a new career as a broadcaster, Ryan says the division won’t be the same.

“It’s a little different,” Ryan said. “Obviously playing against Drew every year for my entire career was a challenge. He’s a great player.”

Jameis Winston has been named the successor to Brees.

Saints coach Sean Payton must show he can win without Brees. GM Mickey Loomis says that point has been proven.

New Orleans was 8-1 without Brees the last two seasons, including 5-0 with Teddy Bridgewater when Brees was out with a thumb injury in 2019. The Saints were 3-1 with Taysom Hill at quarterback while Brees was out with injured ribs last season.

Hill is expected to have a role behind Winston this season. Loomis said Payton will find a way to keep the Saints winning.

“Sean and his staff will adjust accordingly,” Loomis said. “I think they’ve been fantastic doing that over the years.”

With a healthy Christian McCaffrey at running back, the Panthers have renewed cause for optimism.

Carolina’s playoff hopes rest firmly on the right arm of Darnold, who has replaced Bridgewater. Darnold is looking for a fresh start in Carolina after going 13-25 in three seasons as Jets starter. Panthers second-year coach Matt Rhule has gone out of his way to avoid putting pressure on Darnold, emphasizing repeatedly that his role in the offense will be to avoid mistakes.

“I think Sam’s doing really well,” Rhule said. “He’s evolving, he’s growing, and getting good reps, and a lot of different looks, and for the most part protecting the football.”

Darnold has more weapons to work with than in New York with 1,000-yard receivers D.J. Moore and Robby Anderson returning along with promising rookie Terrace Marshall Jr.

Darnold's best asset is McCaffrey, who is healthy after missing 13 games last season due to multiple injuries. McCaffrey, who caught 106 passes in 2018 and 116 in 2019, figures to be the primary check-down target for Darnold and will handle the bulk of the running game.

A total rebuild likely would have meant the team would have used the No. 4 overall pick in this year’s NFL draft to select a quarterback. Instead, tight end Kyle Pitts was the choice and Ryan returns for at least one or two more seasons.

Ryan has a capable lead receiver in Calvin Ridley. The big offseason addition was running back Mike Davis, who filled in for McCaffrey in Carolina last season.