Bucs look to end another non-playoff year on positive note 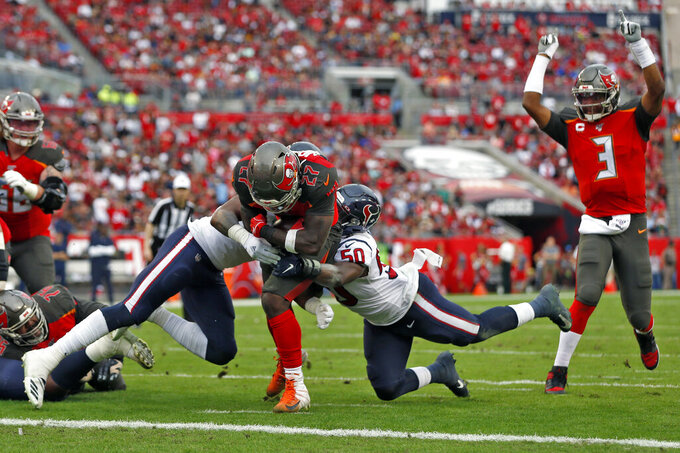 TAMPA, Fla. (AP) — The Tampa Bay Buccaneers no longer have a shot at a winning record.

Finishing .500, though, would give them some much-needed momentum heading into another winter that’ll begin without a playoff appearance, so they’re intent on finishing strong against NFC South rival Atlanta.

“8-8 tastes a whole lot better all offseason,” coach Bruce Arians said, reflecting on the importance of rebounding from a 23-20 loss to the Houston Texans and ending on a winning note. “So yeah, we talked about it in the locker room right after the game. There (are) no losers in this locker room — let’s make sure of it.”

The Bucs will miss the playoffs for the 12th straight year, the second-longest postseason drought in the league. Cleveland hasn’t earned a berth since 2002, the season Tampa Bay won its only Super Bowl title.

After struggling the first half of the season, a young defense has made strides during a stretch in which the Bucs have gone 5-2 after a 2-6 start. In addition to holding Deshaun Watson without a touchdown pass last weekend, Texans receiver DeAndre Hopkins was limited to just 23 yards receiving on five catches and Houston managed just 229 yards.

Arians is as baffled as anyone about Jameis Winston’s propensity to throw interceptions on the first drive of a game. It’s happened five times in the past seven games, six times total this season. The coach also is at a loss to explain why Winston has thrown 22 of his NFL-high 28 interceptions at home.

Wide receiver Breshad Perriman is making the most of an increase in playing time because of injuries to Mike Evans, Chris Godwin and Scotty Miller. He’s topped 100 yards receiving the past two games after not having 100-yard performances during the first three seasons of his career with Baltimore and Cleveland.

While Winston leads the league with 4,908 yards passing and made a case for himself to remain in Tampa Bay beyond this year, his four-interception day against the Texans showed why many believe giving him a new deal is still a risky proposition.

Arians reiterated that a decision on Winston’s future will not be made until the end of the season.

“There has been no decision on any player,” Arians said. “We don’t make those decisions until the season is over.”

Godwin was inactive against Houston with a hamstring injury. He’s yet to be ruled out for this week.

Four. The number of times Winston has thrown an interception on his first pass of a game this season. Texans cornerback Bradley Roby returned the latest 27 yards for a touchdown. It was the sixth pick-6 thrown by the Bucs quarterback in 15 games.

“(He is) the same guy that threw four touchdowns last week ... but we had our chances to win,” Arians said. “It’s a team game, not a one-man game. He didn’t lose the game, but he didn’t help us win the game.”