Cardinals coach Kingsbury, 2 others to miss Sunday vs Browns 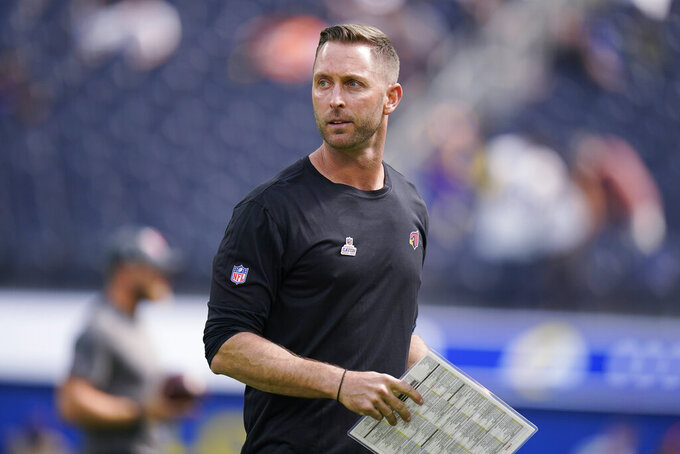 FILE - In this Oct. 3, 2021, file photo, Arizona Cardinals coach Kliff Kingsbury walks on the field before the team's NFL football game against the Los Angeles Rams in Inglewood, Calif. Kingsbury and an assistant coach and a player will miss the Cardinals' game Sunday at Cleveland after testing positive for COVID-19. (AP Photo/Jae C. Hong, File)

The news adds to the virus woes for the NFL’s only unbeaten team, which also put star linebacker Chandler Jones on the reserve/COVID-19 list Tuesday.

Defensive coordinator Vance Joseph, who has head coaching experience in Denver, and assistant head coach/special teams coordinator Jeff Rodgers will split head coaching responsibilities for Cardinals, who are 5-0 for the first time since 1974. Additional offensive duties will be assumed by other members of the offensive coaching staff, the team said Friday.

Kingsbury said earlier this week that the team has been 100% vaccinated for quite a while, but that hasn't stopped the virus from upending their plans.

The third-year coach did his usual Friday morning media availability at the team's practice facility, several hours before the news came that he'd tested positive.

The Cardinals should be in good hands with Joseph and Rodgers. Joseph was the Broncos' head coach in 2017 and 2018 and has helped Arizona make steady improvement on the defensive style of the ball. Still, the team will likely miss Kingsbury's playcalling, which has been among the league's most creative since he came into the league.

Allen — a third-year pro — is a key piece to the Cardinals' defense and had a sack last week in a win over the 49ers. Jones was the NFC Defensive Player of the Week after a five-sack performance in the season opener against the Tennessee Titans.