Cardinals pushing for playoffs in home game vs. 49ers 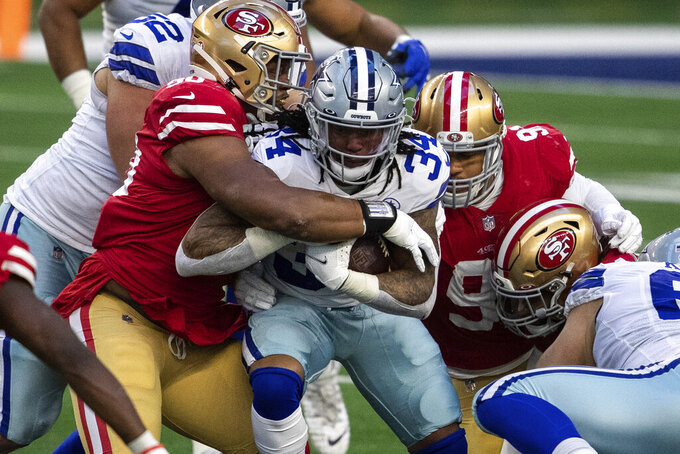 Dallas Cowboys' Rico Dowdle is tackled as he carries the ball against the San Francisco 49ers in the second quarter of an NFL football game Sunday, Dec. 20, 2020, in Arlington, Texas. (Yffy Yossifor/Star-Telegram via AP)

GLENDALE, Ariz. (AP) — The Arizona Cardinals are in the middle of the playoff race for the first time in years, while the San Francisco 49ers have been eliminated from the postseason one year after playing in the Super Bowl.

Saturday's game between the two teams is yet another example of how quickly things can change in pro football.

“This is the NFL, it’s competitive, it’s really close,” Arizona quarterback Kyler Murray said. "The fact that we're still where we want to be in the thick of things is all you can ask for at this point in the season.”

Arizona (8-6) is trying for its fifth season sweep in the past six years over San Francisco (5-9), which lost to the Cardinals 24-20 in Week 1 and has lost six of its past seven games overall.

The Cardinals are currently in the No. 7 and final spot in the NFC playoff race. They can clinch a spot in the postseason for the first time since 2015 if they win on Saturday and the Chicago Bears lose or tie against the Jacksonville Jaguars on Sunday.

C.J. Beathard will make his first start at quarterback for the 49ers since 2018 with both Jimmy Garoppolo and Nick Mullens out injured. Beathard believes he has developed into a better player than the quarterback who won one of 10 starts in 2017-18, with 13 interceptions, 12 TDs and a 74.6 rating. He has shown a few flashes in mop-up duty this season, and this is an opportunity to show how much he has improved before becoming a free agent this offseason.

Cardinals receiver DeAndre Hopkins has taken some criticism in Arizona media circles for his lack of time on the practice field. But it's hard to argue with his game production: He leads the NFL with 1,324 yards receiving and was recently selected to his sixth Pro Bowl.

Hopkins good-naturedly called out some of those critics earlier in the week. He said he doesn't listen too much to local media but that his grandfather informs him of some of the highlights.

“Tell those people who say I don't practice to come watch me play the game," Hopkins said with a grin.

One of the bright spots this season for the Niners has been the play of left tackle Trent Williams. A perennial Pro Bowler during his time in Washington, Williams has gotten back to that form with the 49ers after sitting out all of last season. Williams was voted to his eighth Pro Bowl this week and called this his most satisfying.

“It never gets old,” he said. “Every year it’s just as special as the last. This year is far more special for me just because of what I had to overcome last season. It was a mountain climb for me.”

Cardinals defensive lineman Zach Allen had a huge game against the Eagles last weekend, finishing with 11 tackles, one sack, one tackle for loss, one quarterback hit and one pass defended. He was the first defensive lineman to have at least 11 tackles, one sack and one pass defended in a game since New England's Willie McGinest did it back in 2003.

Allen, in his second season after being selected in the third round out of Boston College, is among a handful of little-known players who have had a big impact on the Cardinals this season.

“He just had a couple of injuries that had slowed him down, but to get him back out there and watch the success he’s having is cool to see,” Cardinals coach Kliff Kingsbury said. "He’s a guy who was uber-productive in college. He tends to always be around the quarterback when he’s in there, and it’s been nice to see him have some of that production show up here the last couple of weeks.”

The Niners have been based in Arizona all month after being kicked out of their home stadium because of coronavirus rules banning contact sports in Santa Clara County. Many of the players and coaches got a lift this week when several families arrived for the holiday. Coach Kyle Shanahan said he would juggle the schedule to make sure everyone had time with families on Christmas morning.

“I know everyone loves being with their family, but it’s valued a lot more when you’ve been away for a while,” Shanahan said.

The 49ers-Cardinals game will be the first to air on a national level exclusively on Amazon Prime Video, Twitch and Amazon’s other services. The game will also be broadcast in Arizona’s and San Francisco’s home markets.