Despite skid, Daniel Jones shows he is the Giants' future 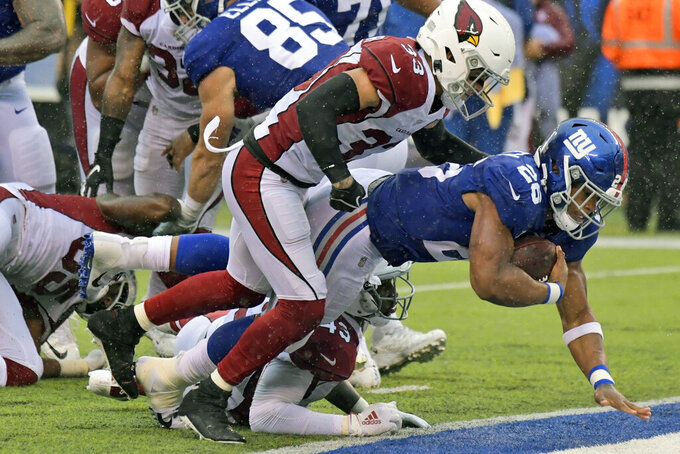 EAST RUTHERFORD, N.J. (AP) — The past three weeks haven't been the greatest for rookie quarterback Daniel Jones and the New York Giants.

The team has lost three in a row. Jones and the offense have averaged 229 yards in those games, scored four touchdowns and turned the ball over eight times, with the sixth pick overall in the NFL draft throwing five interceptions and losing two fumbles.

Jones lost two fumbles and threw an interception in Sunday's 27-21 loss to the Arizona Cardinals.

Call it growing pains. It has happened to the best of them, Eli Manning included. He was 1-6 after taking over from Kurt Warner in his rookie season in 2004.

The problem is it's tough to watch, especially for the fans. The Giants are 2-5, which is the 14th best record in the NFC. Their wins have been against Tampa Bay (2-4) and Washington (1-6) and four of their five losses haven been by at least 14 points.

That's not encouraging in a season where co-owner John Mara said he wants the team to be more competitive.

If there is a positive, Shurmur is sticking with Jones no matter what happens.

Jones said his goal is to keep working. He knows he has to cut turnovers without losing his aggressiveness.

"That's the challenge, to keep making progress and to make progress throughout the game, throughout the situation, whatever it is, to continue to improve on everything," he said Monday.

Shurmur also has to do better. Calling a draw on third-and-18 from his own 30 with 3:11 to play is questionable. After seeing Saquon Barkley gain 3 yards, he went for it on fourth-and-15. Jones was sacked, lost a fumble and the Cardinals got their final three points.

Hard to say. The punt block team got a block from Michael Thomas and a fumble recovery for a touchdown on the play from Eli Penny. It was one of the few bright spots. The defense settled down after give up 17 points on the opening three Arizona series.

The offensive line broke down at the end of the game when the Cardinals knew Jones was going to throw. All the sacks were not the line's fault. Jones has to get rid of the ball quicker and the receivers have to get open sooner. Still, the line was not good. The run defense was bad with Cards' backup Chase Edmonds rushing for 126 yards and three TDs, career bests.

Golden Tate. There is no doubt he had alligator arms on the first pass Jones threw to him. It was in traffic and he would have taken hits, probably from two defenders. He finished with six catches for 80 yards. Every catch went for a first down, including two on third down and one on fourth.

"I didn't come here to lose," Tate said. "I came here to help get things turned around and help us win a bunch of games. I still believe that we can do that, we just need to be a little bit better."

It would be easy to say the offensive line. Let's settle for PK Aldrick Rosas. He made the Pro Bowl last season, making 32 of 33 field goal attempts. He is 4 of 6 on field goal attempts this season, missing a 37-yarder in the third quarter with the Giants down 10. With the offense struggling, he needs to be better.

Linebacker Lorenzo Carter had an ankle injury. He said Monday he was cleated and expects to be ready for the Lions. WR Sterling Shepard and CB Corey Ballentine remain in concussion protocol. Shurmur said Barkley was sore after first game in three weeks.

8 and 3 — Times Jones was sacked. Jones' turnovers. Can't happen if the Giants hope to win.

The offense and defense have to show up from the outset against the Lions. For most of the season, one of the units has been AWOL at the start. The Giants are not good enough to overcame that.