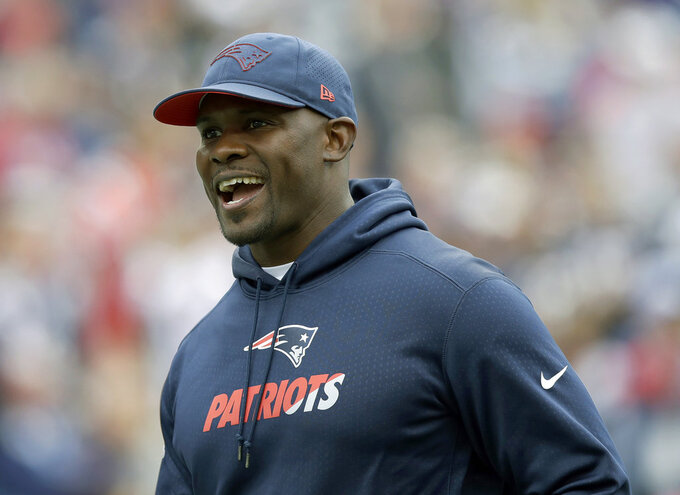 MIAMI (AP) — The Miami Dolphins have begun their search for a coach who's ready to lose this year.

New England Patriots linebackers coach Brian Flores and Kansas City Chiefs offensive coordinator Eric Bieniemy, the first candidates to interview for the Dolphins' job, met with them Friday. Owner Stephen Ross is seeking a replacement for Adam Gase , and wants to rebuild after a 7-9 season.

Gase, fired Monday after three seasons, led the Dolphins to the playoffs in his first year. That isn't likely to happen with the new coach.

Miami has finished with six to eight wins in nine of the past 10 years, and hasn't won a playoff game since 2000. As a result, the 78-year-old Ross said, his win-now approach will change.

"I would hope I don't have to go 3-13," Ross said this week. "But whatever it's going to take, we're going to build the organization with the right players."

The roster revamp is expected to include the departure of quarterback Ryan Tannehill, who has been with the team since 2012.

Miami's search is being led by general manager Chris Grier, who has been with the team for 19 years and took charge of football operations in this week's organizational shake-up. Grier said he embraces Ross' desire to take a long view in building the team.

"It's not about winning one year and then falling back," Grier said. "We want to build this thing the right way, where it's long sustained success where the fans are happy, Steve is happy and we're winning for long periods of time."

Grier has said the Dolphins will investigate every avenue in pursuing a coach, and neither NFL experience nor head-coaching experience is a necessity. The next coach, who will report to Grier, will be Miami's 10th since 2004, including three interim coaches.

Bieniemy is in his sixth season with the Chiefs and his first as offensive coordinator. This season they led the NFL in points and yards. He also interviewed this week for the New York Jets' head coaching job.

Flores has been a Patriots assistant for 11 seasons and took over defensive play-calling a year ago after the departure of defensive coordinator Matt Patricia. Flores is also expected to interview for head coaching jobs with the Cleveland Browns and Denver Broncos.

By Julie Watson 17 minutes ago
By Stephen Whyno 2 hrs ago
By Dennis Waszak Jr. 17 hrs ago
By Tom Withers 18 hrs ago
By Kristie Rieken 22 hrs ago