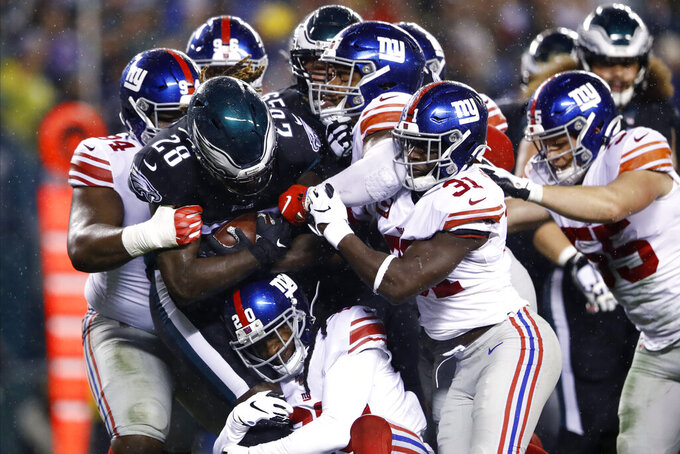 PHILADELPHIA (AP) — Carson Wentz relied on a bunch of guys off the practice squad and his go-to guy Zach Ertz to rally the Philadelphia Eagles.

After Eli Manning led the New York Giants to a 14-point lead, Wentz brought the injury-depleted Eagles back and tossed a 2-yard touchdown pass to Ertz in overtime to give Philadelphia a 23-17 win on Monday night.

The Eagles (6-7) snapped a three-game losing streak and moved into a tie with Dallas (6-7) for first place in the NFC East. Philadelphia takes the division title if it wins its final three games. The Eagles meet the Cowboys in Week 16.

“Guys stepped up and made plays,” Wentz said. “We had guys moving around and I had no choice but to trust these guys."

The Eagles were down to one healthy wide receiver by the end of the game and were using inexperienced guys and players out of position. Ertz, a Pro Bowl tight end, had to line up at wide receiver.

“We understood as a team that we had to find a way," Ertz said.

Manning, the two-time Super Bowl MVP, threw a pair of TD passes to Darius Slayton in his first game since Week 2. Filling in for injured rookie Daniel Jones, Manning was 15 of 30 for 203 yards. But he couldn't prevent New York (2-11) from losing its ninth straight game, tying a franchise record set in 1976, when the team opened 0-9.

“I've played a lot of football games," Manning said. “I know the offense and know what I'm supposed to do. I made some good throws and didn't make some plays that I needed to."

Already missing three starters on offense, the Eagles lost wide receiver Alshon Jeffery and right tackle Lane Johnson in the first half and were booed off the field trailing 17-3 at halftime.

They went three-and-out on five straight possessions before Boston Scott caught a 10-yard pass on third-and-5 in the third quarter. Scott then ran 4 yards to the 2 on third-and-3 and scored on the next play to cut it to 17-10.

Scott, one of the former practice squad players, provided a big spark. He had 59 yards rushing and 69 yards receiving.

“Just do my job. You never know when your opportunity might come," Scott said.

Wentz drove Philadelphia to the Giants 29 with just under 10 minutes left but Greg Ward dropped what should've been a 29-yard TD pass on third-and-11. Jake Elliott then missed a 47-yard field goal wide left.

But the defense held and Wentz drove the Eagles 85 yards and connected with Ertz to tie it.

The Eagles won the toss in overtime and went 75 yards.

Ertz had nine catches for 91 yards.

Manning connected with Slayton for a 35-yard TD on a third-and-13 to give the Giants a 7-0 lead on the first play of the second quarter. Ronald Darby missed a tackle that would've stopped Slayton short of a first down.

Manning hit Slayton for a 55-yard TD on third-and-8 with 27 seconds left in the first half to give the Giants a 17-3 lead.

“I thought he battled. He did a lot of good things," Giants coach Pat Shurmur said of Manning.

Down 7-0, the Eagles got going when Wentz connected with Ertz on consecutive passes of 24 and 30 yards. Wentz then hit Ward for a 9-yard TD that was negated by a holding call on Brandon Brooks. The Eagles settled for Elliott's 34-yard field goal.

Manning, who turns 39 next month, is a free agent after the season. It's uncertain when Jones will return, so it's possible Manning could make at least one more start at home.

The Eagles had lost 19 straight games when trailing by 14 or more points in the second half before rallying against the Giants. They previously overcame a 20-6 deficit in a 30-27 win over Indianapolis in Week 2 of the 2014 season.