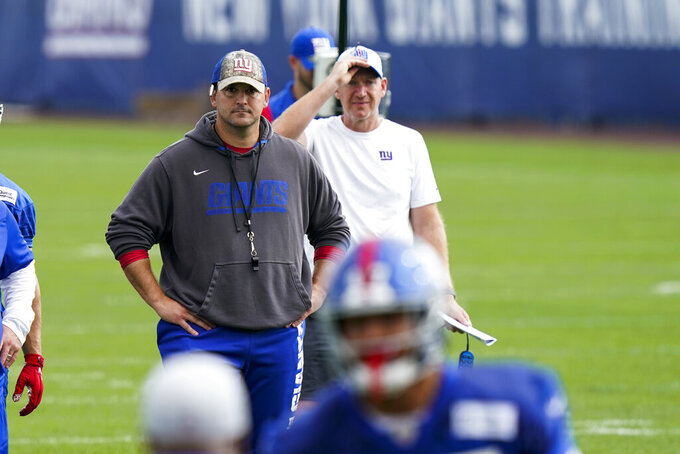 EAST RUTHERFORD, N.J. (AP) — Safety Xavier McKinney is entering his second season with the New York Giants a little smarter, more experienced and still feeling he has much to learn.

McKinney didn't have the rookie season the Giants had hoped for when they selected the Alabama standout with the 36th pick overall in the draft.It was expected McKinney would either earn the starting job opposite Jabrill Peppers or he would share the spot with Julian Love, who had played well at the end of his rookie season.

McKinney broke his left foot in training camp, had surgery and missed the first 10 games of the season. He didn't return until after the bye week and gradually earned some playing time, finishing with 25 tackles and a game-saving interception in the final game of the season against Dallas.

“It feels like year two and obviously it is a year two, but I still feel like I’m a rookie, just because I haven’t played a lot of games yet,” McKinney said Thursday after the team's second training camp practice. “So I still got a lot to learn, a lot to improve on. Like I said, I just take it one day at a time and try to improve and get better.”

While McKinney was healing last year, the Giants didn't let him rest. The coaches made him prepare offensive tendencies for upcoming receivers and quarterbacks. He then had to deliver a presentation to the defensive backs' room.

McKinney said the prep work allowed him to see the field better when he did return and helped his confidence.

“When I came in, I thought I knew how to study, how to do certain things,” he said. “But as the season went on and now coming into this year, I found new ways to prepare. The small things that I didn’t pay attention to before, that’s what I pay attention to now.”

McKinney will face some stiff competition for playing time. Peppers and Love are back, and so is veteran Logan Ryan. He was signed just before the season and he had an outstanding year, making 94 tackles with a sack and an interception.

In coordinator Pat Graham's defense, McKinney will get playing time. Graham stresses versatility for his unit and he uses his players in a variety of roles, whether it's a safety, a slot cover guy or someone who plays in the box.

And McKinney wants to be around the ball.

“I pride myself in on that,” the 21-year-old said. “That’s something that I kind of remind myself before every practice, before every game is to go attack the ball rather than wait for something to happen. Obviously, I want to make plays. So, obviously, I still do what’s right for the team. But, you know, when the opportunity is there, I try to try to seize it.”

Veteran tight end Kelvin Benjamin was not happy after being released by the Giants on Wednesday. He complained that the second-year head coach approached him on the field at practice instead of in his office to tell him he was being fined for being overweight.

Judge refused to say much about the incident, saying it was done in the best interest of the team.

“I’m not going to overanalyze or dissect what happened specifically yesterday with one move,” Judge said. “Things happen differently all the time, so guys, it is what it is. I wish him well.”

NOTES: Starting left guard Shane Lemieux left the field with what the team described as a knee issue. There was no elaboration. ... Judge had players running penalty laps for mistakes and penalties. Among those getting extra exercise were quarterback Daniel Jones and tight end Evan Engram.