Tagovailoa, most other Dolphins starters to sit out at Cincy 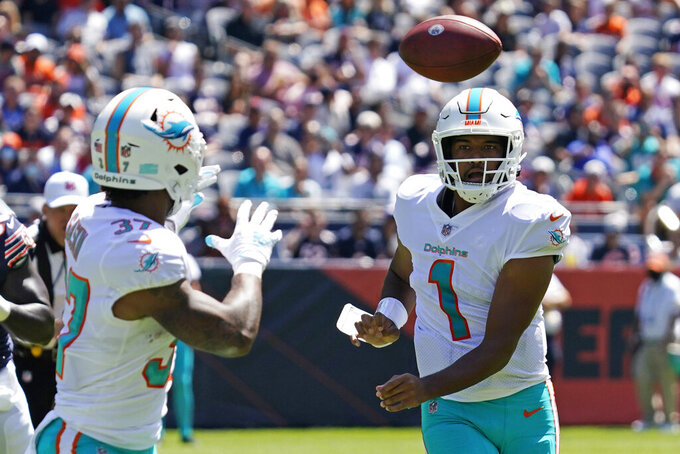 Miami Dolphins quarterback Tua Tagovailoa, right, passes the ball to running back Myles Gaskin during the first half of an NFL preseason football game against the Chicago Bears in Chicago, Saturday, Aug. 14, 2021. (AP Photo/Nam Y. Huh)

MIAMI GARDENS, Fla. (AP) — Quarterback Tua Tagovailoa and most of the other Miami Dolphins starters will sit out the team's exhibition finale Sunday at the Cincinnati Bengals.

“We’ve got to play the game, so we’re not going to rest everybody,” Flores said. "So there will be some guys in there who will get an opportunity. But we’ll try to rest most of the — let’s call them ‘starters.’”

Tagovailoa, who has had a strong training camp, will finish the preseason 24 for 34 for 282 yards with one touchdown and one interception and a 93.0 passer rating. He was particularly impressive in a victory against Atlanta on Saturday, when he completed 16 of 23 passes for 183 yards and one touchdown.

Decisions regarding playing time in the preseason for starters have been in the works for a while.

“We talked about it and kind of laid out the summer practice schedule in a way with the joint practices and how we were going to play them in Games 1 and 2, and felt good about going this route,” Flores said.

The Dolphins open the season Sept. 12 at New England.